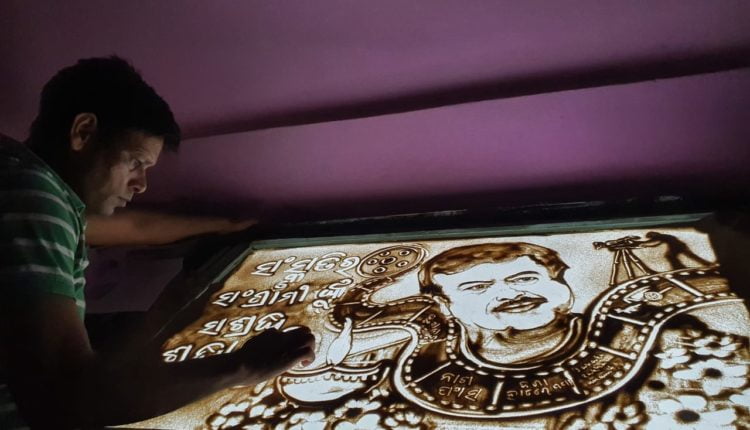 Bhubaneswar: The mortal remains of legendary actor Bijay Mohanty were consigned to flames with state honours at Satya Nagar crematorium in Odisha capital on Tuesday.

As a tribute to the veteran actor, artist Manas Kumar Sahoo has created a sand animation. He portrayed him as the ‘Captain of Ollywood’ who will always be remembered for his acting. It took him two hours to picturise this tribute.

The versatile actor breathed his last breath at a private hospital in Bhubaneswar on Monday. He had been ailing for the past few months.

Bijay was brought back to Odisha from Hyderabad, where he was undergoing treatment at a private hospital after suffering a heart attack, in an ambulance on June 14, after he insisted on returning home. He was then admitted to Care Hospitals. Two days after being discharged, he was re-admitted to the hospital on July 3 and again allowed to go home. His condition became critical and he was again admitted to the hospital on Monday evening. He died while undergoing treatment there.

A pass-out of National School of Drama, he made his foray into Ollywood with ‘Chilika Tire’ as a rebellious hero. However, ‘Nagaphasa’ in which he played a villain was released first. He went on to essay several character roles after the 1982 film ‘Kaberi’ in which he played the second lead to Sriram Panda. ‘Jaga Hatare Pagha’ was one of his popular films.

A native of Kendrapada, he won Odisha State Film Awards six times and was conferred with the Jayadev Award in 2014.

Bhubaneswar Junior WC Hockey: India No Match For Germany In Semis, To Face France For…