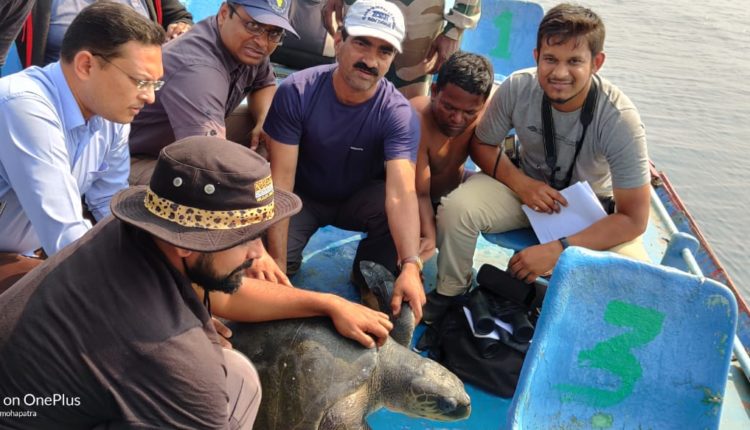 Berhampur: The Forest officials on Tuesday started satellite tagging of Olive Ridley sea turtles that come to Rushikulya coast in Ganjam district for nesting to know the details of the endangered species’ migratory patterns.

Assistant Conservator of Forests (Administration), Berhampur division Ashok Kumar Behera said the Forest officials will carry out the tagging in collaboration with the Zoological Survey of India (ZSI).

“Total 30,000 turtles would be tagged in due course and six turtles including 2 males and 4 females were tagged on the first day,” said the ACF along with Data Manager Subrat Kumar Behera.

“The second-of-its-kind study on the Rushikulya coast will provide insights into the turtles’ migratory patterns and routes, their behavior at sea, location of their marine habitats, and how turtles use the different habitats,” said the ACF.

The tags are uniquely numbered and have details such as the name of the organization, email, and other details.

The tagging exercise was carried out in presence of Divisional Forest Officer (DFO) Berhampur Amlan Kumar Nayak, Forest officials, and scientists including Dr. Basudev Tripathy, Dr. Anil Mohapatra, and others.

This exercise is conducted in Odisha after 25 years. Earlier, the satellite tagging of Ridleys on the Rushikulya coast was conducted in 1994-96 when 8,000 turtles were tagged.