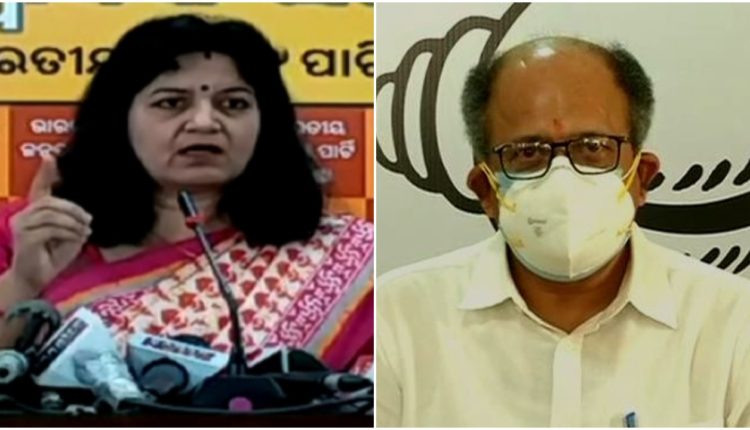 Bhubaneswar: The BJP and ruling BJD engaged in a war of words on Saturday over the Sustainable Development Goals (SDG) India Index of Niti Aayog for 2020-21.

— After 21 years of the BJD government, why are 33% of people of Odisha below poverty line (BPL) while in Andhra Pradesh, BPL is only 9.2%? Besides, 14.2% of 1 crore households in Odisha stay in kutcha houses as compared to Andhra Pradesh (3.2) and West Bengal (6). Why are there such a high number of kutcha houses here? Has the BJD government failed the people of Odisha?

— Why does Odisha occupy the bottom five places? Isn’t it shameful? We are called a very poor state. Isn’t it an affront to the dignity of Odias?

— The SDG report states that there are 103.5 women per one lakh population in Odisha with crimes against their names. This represents one of the highest crime rates of women in the country. The conviction rate is just 8.3%. In child pornography, we are the worst in the country. About 48% of women in Odisha are anaemic, which is one of the worst in the country. Around 29% of our children under five years are stunted/underweight. What has been the state government doing for so many years to improve the status of children and ensure dignity of women? Has Mission Shakti failed? Has the government miserably failed to safeguard the women of our state?

— In Ease of Doing Business, Odisha has scored zero. In Innovation Ranking, Odisha has gone down from 12th to 14th rank. Where does the youth of Odisha go? Why should they leave their aged parents and go to other states to earn a living? Why so much migration came to the fore during COVID times? Has the state government failed the youth and business community of our state?

“The BJP leader tried her best to divert the attention of people from the major issue of COVID vaccination but failed. When foreign countries are not allowing Indian students although they are administered with Covaxin vaccine, BJP indulging in politics on SDG report instead of laying utmost emphasis on this matter and focusing on quick vaccination drive is grossly unfortunate,” Patnaik said.

On the industrial index, Patnaik questioned how come Odisha, which was India’s leading state in terms of industrial investment in 2019 and got 92 points, has been awarded zero point in SDG index.

“On the contrary, SDG index has awarded 99 points to Odisha in the banking sector although banking services are yet to reach rural pockets in the state,” he observed.

Patnaik further said that the SDG report doesn’t mention railway sector development in the state. “Railway service is yet to reach six districts of Odisha till date,” he noted.

The BJD leader also said that while mobile and Internet services are yet to reach remote areas of Odisha, the SDG index in 2019-20 had awarded 123 points to Odisha for Internet connectivity but surprisingly slashed it to 44 this time.

“Unfortunately, the BJP leader in her statement has not raised these above anomalies,” Patnaik asserted.

COVID-19: How Vulnerable Are Children? Hear It From Paediatric Expert