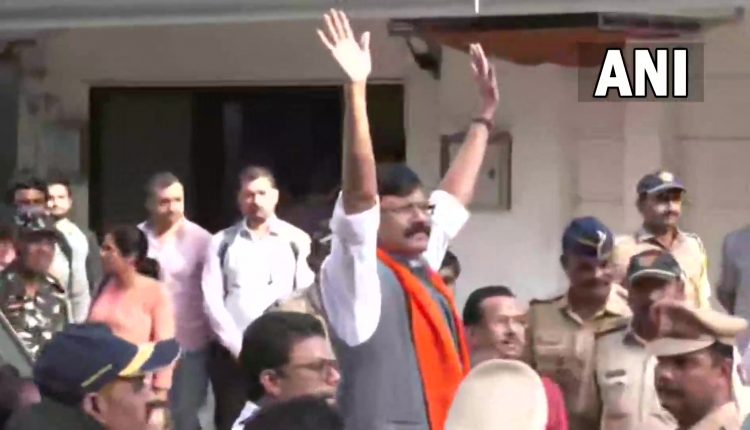 Mumbai: The Enforcement Directorate (ED) officials on Sunday detained Shiv Sena MP Sanjay Raut in connection with a land scam case after conducting searches and questioning at his house in Mumbai.

After recording his statement on July 1, the Shiv Sena leader had skipped summons twice for questioning in a money-laundering case linked to the alleged irregularities in the re-development of a Mumbai ‘chawl’ and related transactions involving his wife and ‘associates’ due to engagement with the ongoing Parliament session.

Denying any wrongdoing, Raut, 60, tweeted this morning after probe agency officials visited his home: “…False action, false evidence…I will not leave Shiv Sena…Even if I die, I will not surrender…I have nothing to do with any scam. I am saying this by taking the oath of Shiv Sena chief Balasaheb Thackeray. Balasaheb taught us to fight. I will continue to fight for Shiv Sena.”

Addressing the party leaders and workers from Thane district at his residence earlier in the day, Shiv Sena president Uddhav Thackeray had said that the ED may arrest Raut. He further alleged that the agency’s ongoing action was part of a “conspiracy” to finish off the party.

The agency had earlier arrested Pravin Raut, a close associate of Raut, in connection with a Rs 1,034-crore alleged land scam related to the re-development of the Patra chawl in Goregaon area.

In April, assets worth over Rs 11.15 crore of Mr Raut’s wife Varsha Raut and two of his associates were attached by ED as part of its probe.

Hilsa, The Queen Of Fish