Hilsa, The Queen Of Fish 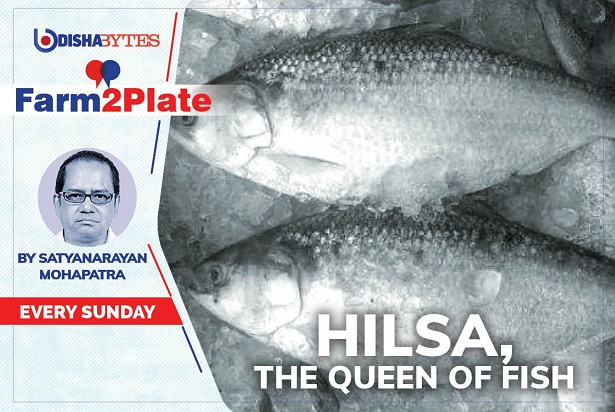 Most fish-eating connoisseurs may not know about Hilsa as this is restricted to a very few cuisines. To some this is the most-prized fish. Legend has it that Muhammad bin Tughlaq, the tyrannical Sultan, too succumbed to the lure of Hilsa. The fish is packed with fat which gives it a distinctive aroma, taste and texture. It is healthy fish fat packed with the goodness of Omega-3 fatty acids. Like bacon, the oil that oozes out from the fish while frying it in mustard oil is cherished for its flavour. Hilsa spawns in freshwater and the young fish then makes a several months long downstream journey into the sea. Later, the adults swim several kilometres upstream to return to freshwater and lay eggs. These adults that have made their way from the sea are the prized catch. This is also why we often find Hilsa with a bellyful of roe, which is a delicacy when fried with the steak cut — the belly and the back which we refer as ‘peta’ and ‘peethi’.

Come monsoon and when the talk / gossip takes its turn to fish, it centres on Hilsa. I still remember sitting on the cycle handle and being paddled by my uncle to Jobra Annicut from Meria Bazar to bring in Hilsa aka Illish from the ever-bustling Jobra fish market. The Mahanadi Hilsa has its own charm, which glistens like a fresh ingot of molten silver. The once famous Mahanadi Hilsa has now vanished and has become the discussion of the yo days for all those who have devoured it.

It’s a fish wherein all parts are relished in the same equation and cooked in different styles and recipes. Be it the ‘munda’ (head) or ‘lanja’ (tail) or the offal or the steak pieces. Each part as described is unique and delicious. When coming to Hilsa it is a policy of ‘waste — not want — not’.

Now there is the ‘munda’ (head), roe and the ‘tela’ or the off cuts — offal (the fat, liver and intestines). Not to miss the bony tail. These are the parts that most kitchens throw away or used in a way as food for the helping hands in the kitchen. But when it comes to Hilsa each and every part is a culinary delight and prepared through a specialised process. Thus every single part is open to culinary interpretation.

Starting off with the centre part of the body — generally we divide or split the steak into two parts ‘peta’ and ‘peethi’. The ‘peta’ depending on your palate can leave the roe or the offal and the taste is yum which has a similar taste like duck fat. These parts come on to the dining table — in the form of fry, steamed with mustard slathered on to the pieces, besar jhol or haldi pani jhol, and the list goes on. Though the above recipe has changed quite a lot with the fusion approach but there is a lot of wastage in fusion recipes which we Odis cannot afford.

All said and done, however, my favourite way of eating the ‘peta’ and ‘peethi’ is a preparation that is as traditional as it is forward thinking — the Microwave ‘Bhappa Shoresho Hilsa’, a technique I’ve seen and heard from DINK homemakers employ, which is magical. Since it is a more consistent and controlled cooking device versus a steamer, it’s very hard to overcook the mustard-slathered fish, and it really does make for the most succulent, melt-in-your-mouth experience.

Heads I win and Tails you lose: The ‘munda’ is quite often used in making ‘chenchada’ or ‘daal’ — as a meaty Umami backbone to a stronger vegetal base. But the most unique and delicious preparation with the off cuts can only be with a sour base using a sweet and sour element like raw mango or tamarind. That union of fatty Umami with sour-hot-sweet (sour-sweet-spicy) is just one of those combinations that goes so well with hot steamy rice: choice is yours — polished or unpolished. The ‘lanja’ is for the hardcore Hilsa fans — it is the boniest part of the bony fish and it’s very delicious when you have it fried. Though it is bony but marbling makes it a la carte.

The wonderful Hilsa offal aka ‘Hilsa tela’ means the offal and innards of the fish with liver and tripe nestled in its abdominal cavity. This offal is usually left inside the ‘peta’ steak. Thus when served everyone gets a little succulent bite of the crunchy fatty piece to enjoy. After frying the rendered fat from the fish along with the mustard oil is a real treat when mixed with hot steamed rice and green chilli fried in the same oil.

For the road: do not settle for the fish which is less than a kilogram. Be sure the catch is from the upstream zone of the river. It’s not tasty if it is from the mouth, estuarine and sea. Be a gentleman when you indulge with Hilsa.