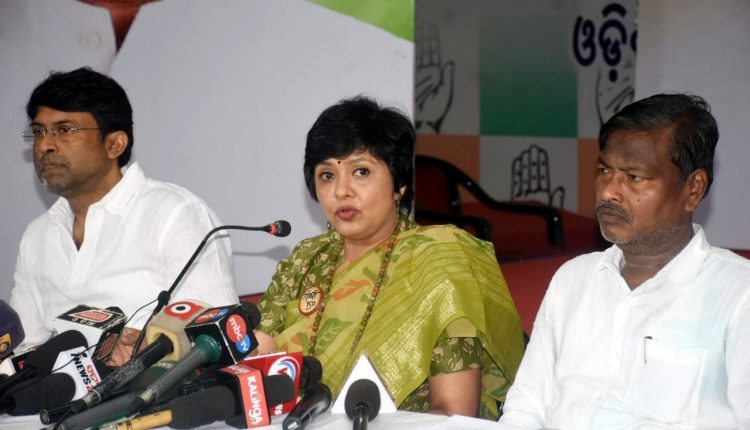 Bhubaneswar: Congress leader Wing Commander Anuma Acharya on Saturday attacked the BJP and alleged its connection with terrorists in a series of incidents across the country, and raised the question whether these are simply Sanyog or Prayog?

“The Indian National Congress does not believe in playing politics over serious national issues like terrorism. However multiple revelations of close links between the Bharatiya Janata Party (BJP) and individuals caught in terror activities force us to ask some straight questions of a ruling party that loses no opportunity to preach to Indians about nationalism,” she said at a press conference held in Congress Bhawan today.

She referred to the following cases to establish her point:

* “One of the accused in Kanhaiya Lal’s beheading in Udaipur was a BJP worker named Mohammad Riyaz Attari, who joined BJP in the presence of a senior local leader. According to media reports, Attari was employed by the son-in-law of BJP’s Leader of Opposition in Rajasthan Vidhan Sabha, Gulab Chand Kataria. He was seen attending numerous party programmes in the presence of senior BJP leaders.”

* “Lashkar-e-Taiba terrorist Talib Hussain Shah, recently captured by locals, was revealed to be a BJP office-bearer in Jammu & Kashmir. Talib had been seen in with Union Home Minister Amit Shah and other senior BJP leaders in pictures. He had been planning attacks on Amarnath Yatra when he was arrested.”

* “Media reports have said that Irfan Khan, accused of masterminding the murder of Amravati chemist Umesh Kolhe, had close links with the Independent MP Navneet Rana and her MLA husband Ravi Rana. Everyone knows the relationship between the Ranas and the BJP. Irfan Khan is known to have campaigned and sought votes for the Ranas.”

* “Former BJP leader and ex-Sarpanch Tariq Ahmad Mir was arrested in 2020 for procuring weapons for Hizbul Mujahideen commander Naveed Babu, who been had previously arrested with DSP Davinder Singh and accused of supplying weapons to terrorists. National Investigation Agency (NIA) has confirmed Mir is an associate of Davinder’s. The truth would have come out had the Davinder inquiry been carried through to its conclusion, but it was halted midway.”

* “In 2017, a special NIA court sentenced Assam BJP leader Niranjan Hojai to life imprisonment. He was found to have participated in a Rs 1,000 crore scam, which was diverted government funds to support a militant group.”

* “The BJP has knowingly gave a ticket to Masood Azhar’s acolyte Mohammad Farooq Khan to contest the Srinagar municipal election from Ward 33. Khan was previously a member of Jammu & Kashmir Liberation Front and Harkat-ul-Mujahideen.

Anuma also stated that the BJP government has the dubious distinction of releasing dreaded terrorist Masood Azhar in 1999 during the Kandahar hijacking. Azhar later founded the Jaish-e-Muhammad terror group, which was responsible for 2001 Parliament attack and 2008 Mumbai attacks that resulted in hundreds of deaths.

The Jaish also masterminded the 2019 Pulwama attack, in which 44 CRPF personnel died, Anuma said, and added that it’s a mystery why an inquiry was not ordered.