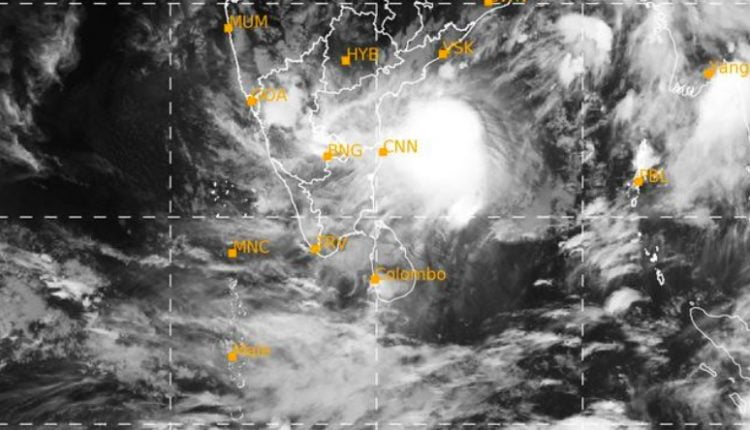 Bhubaneswar: The severe cyclonic storm Asani was about 580 km south of Puri and 510 km south of Gopalpur in Odisha at 5.30 pm after moving nearly northwestward with a speed of 12 kmph during the past 6 hours, the India Meteorological Department (IMD) informed on Monday.

Though the cyclone is expected to lose steam and spare Odisha, it is likely to trigger heavy rainfall in the coastal areas of the state between Tuesday and Thursday,

Heavy rainfall (7-11 cm) is very likely to occur at one or two places in Gajapati, Ganjam and Puri districts.

Heavy rainfall (7-11 cm) is very likely to occur at one or two places in Ganjam, Khurda, Puri, Jagatsinghpur and Cuttack districts.

Heavy rainfall (7-11 cm) is very likely to occur at one or two places in Puri, Jagatsinghpur, Cuttack, Kendrapada, Bhadrak and Balasore districts.

With a 7-11 cm rainfall forecast in parts of coastal Odisha, 15 blocks in Ganjam, Puri, Jagatsinghpur and Kendrapada districts are likely to be affected due to the downpour.

Squally wind speed reaching 40-50 kmph gusting to 60 kmph is also likely along and off Odisha coast on May 11 and 12.

Distant warning signal 2 (asking ships not to come near the coast) has been hoisted in all ports in Odisha in view of the approaching severe cyclone. Very high sea conditions are likely to prevail over westcentral and adjoining south Bay of Bengal and fishermen have been asked not to venture out in the region for the next couple of days, the MeT office said.

According to private forecaster Skymet, the closest position is likely to be abeam bordering areas of North Coastal Andhra Pradesh and South Odisha, nearly 100-150 km away from the shore.

Since the tropical storms have a history of being notorious, Skymet has advised against lowering the guard till definite signs of clearance appear on the horizon. “The tropical storm Asani will continue tracking towards Andhra Pradesh coast and possibly come dangerously close, albeit with weakened zeal. Extreme caution needs to be exercised for the next 48 hours,” it said.

Odisha Boys Pump In Half A Dozen, Ease Into Quarterfinals With Hat-Trick Of Wins