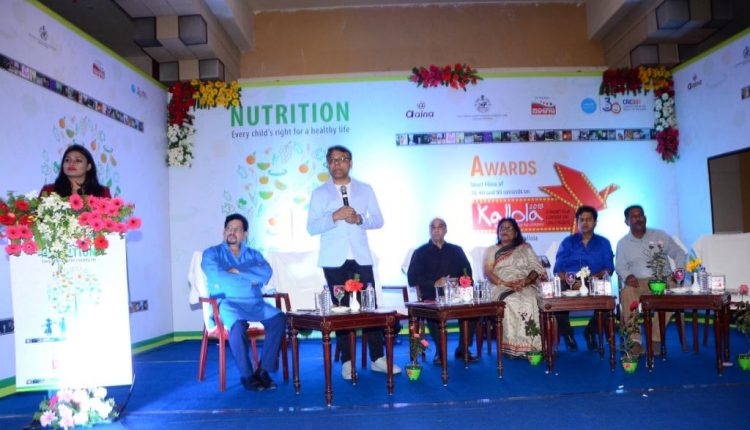 Bhubaneswar: Every child in this world has a right to live a healthy life and what better way to propagate this fact than through the medium of films?

Keeping this in mind, Aaina, an Odisha-based NGO has been organising KALLOLA Awards, a short film contest in collaboration with UNICEF. This year’s theme was, ‘Nutrition – Every Child’s Right For A Healthy Life.

For its fifth season, it had invited entries of short films of 30, 60 and 90 seconds duration respectively. The sub themes were: A balanced diet for growing children and Ending gender discrimination in nutrition. Five films were nominated for the awards. The short film, ‘Waw….’ of 90 seconds duration, directed by Usharani Patra bagged the Children’s Choice Award, the film ‘Khira’ of 60 seconds duration by Saptarshi Mandal got the Jury’s Choice Award. The short films, ‘Sikhaa’ by Pradeep Kumar Jena, ‘Pusti- towards a healthy life’ by Gulshan Mohanta and ‘Essence of Nutrition’ by Ritwik Das of 90 seconds each won the first, second and third awards respectively.

Film actress Nandita Das was the chief guest. The contest this year was in collaboration with the Department of Women and Child Development, Government of Odisha and Alankar TV. Also present were Lopamudra Tripathy and Sourav Bhattacharjee from UNICEF Odisha.

Alternative Assessment Will Help Odisha Plus II Students To…