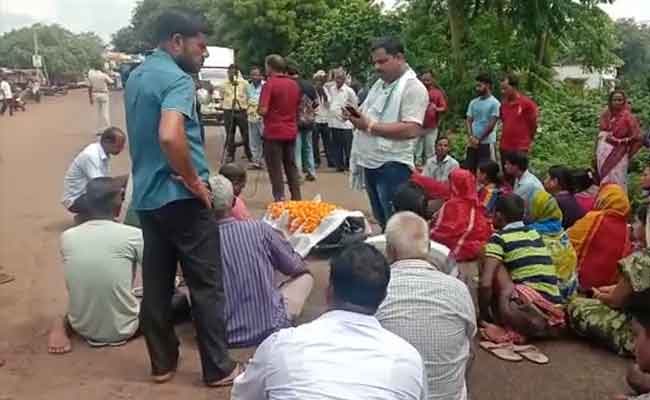 Bhubaneswar: Tension flared up in the village of deceased sub-inspector (SI) of police Swagatika Behera in Odisha’s Khurda district after her body reached there on Monday as the villagers staged a rod blockade demanding adequate compensation to her family.

Soon after the body of Swagatika, who was working as SI at G Udayagiri police station in Kandhamal district, reached her paternal house in Pandavpatna village in Khurda district in the morning after post-mortem, her family members and villagers staged the road blockade.

The villager along with Swagatika’s body resorted to agitation near Nirakarpur College Chhak. As a result, the vehicular traffic on both sides of Khurda-Puri New Jagannath Sadak road came to a standstill and palpable tension prevailed in the area.

Stating that the SI was the sole bread-earner of the family after the death of her father, they demanded job for one of the family members and pension for her mother. On being informed, police rushed to the village and tried to convince the villagers to withdraw their dharna from the road. But the family insisted an assurance from government officials and continued the road blockade.

It may be noted that Swagatika was found hanging at her government quarters on August 27 allegedly due to mental harassment by the IIC of the G Udaygiri police station. On Sunday, Swagatika’s family members had staged a dharna in front of the police station demanding arrest of IIC Rebati Sabar.

Garbage Piles Up On Bhubaneswar Streets: Another Meeting Likely Today Over Dumpyard Row

Odisha Colleges To Have Hostels For Marginalised Students Under PM-YASASVI