Garbage Piles Up On Bhubaneswar Streets: Another Meeting Likely Today Over Dumpyard Row 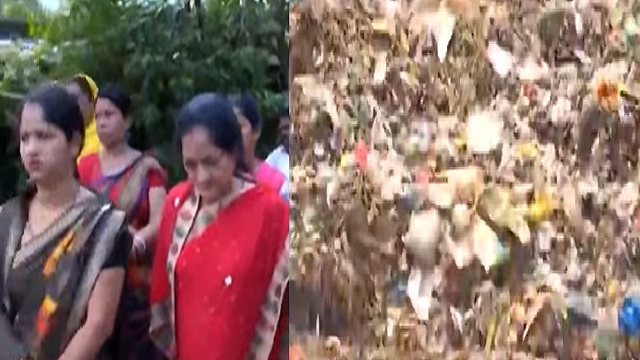 Bhubaneswar: With many parts of Bhubaneswar virtually turning into garbage dumps, a fresh meeting is likely to be held on Monday to resolve the stalemate over the dumping yard in Daruthenga.

Talks between the Bhubaneswar Municipal Corporation (BMC) and villagers of Daruthenga failed to resolve the issue on Sunday, prompting Bhubaneswar MP Aparajita Sarangi to intervene in the matter.

The tussle between the BMC and villagers of Daruthenga over the dumpyard has been going on for more than a year. A fortnight ago, on August 12, a youth was killed after being knocked down by a garbage vehicle on way to the dumpyard. Irate villagers have since stopped BMC’s garbage trucks from going to the dumping yard.

With garbage trucks unable to dump waste at the dumpyard because of the standoff with villagers, garbage has piled up across the city.

“Garbage trucks have stopped coming to our area because of which piles of garbage have filled up the streets. Civic workers are only sweeping the roads but not clearing the garbage despite protests from residents,” a city resident told a news channel.

“Garbage trucks have not come to our area for several days. Women from self-help groups are doing their best to clean the roads. There is garbage and filth all over the ‘smart city’. We would rather move to villages for a better and clean environment,” another resident said.

With villagers not allowing garbage trucks access to the dumpyard in Daruthenga, waste collected from the city is now being dumped at the yard behind the Sainik School. Garbage trucks are having to wait for three-four hours to dispose the waste there.

“More than a fortnight has passed but the sanitation condition of Bhubaneswar is not improving. There are heaps of garbage everywhere in the city. There is tremendous discontentment among the residents of various localities. Kindly indicate as to how I can help to solve the problem,” she wrote.

She said it is unfortunate that garbage dumps continue to pile up all over the city for 17 days.

“BMC should take people into confidence and work unitedly. Be it mayor, commissioner or councillors, all should join ranks and hold talks with senior citizens, intellectuals, youths, women and stakeholders to find a solution,” she said.

Claiming that there was lack of coordination and sincere efforts on the part of BMC officials, Aparajita said, “When I move around the city in the morning, I don’t see supervision by any BMC officials. All the field staff should be present in their respective places from 6 am. It is obvious that there is clearly no coordination among the mayor, councillors and municipal staff.”

“When I was BMC commissioner, we worked as a team. Due to our persistent efforts, Bhubaneswar was ranked as the 5th clean city in the country. But over the years, it has come down in the ranks for lack of sincerity and honest efforts on the part of BMC,” she said.

Aparajita also sought a meeting with Sulochana on September 2 in case the situation doesn’t improve by then.