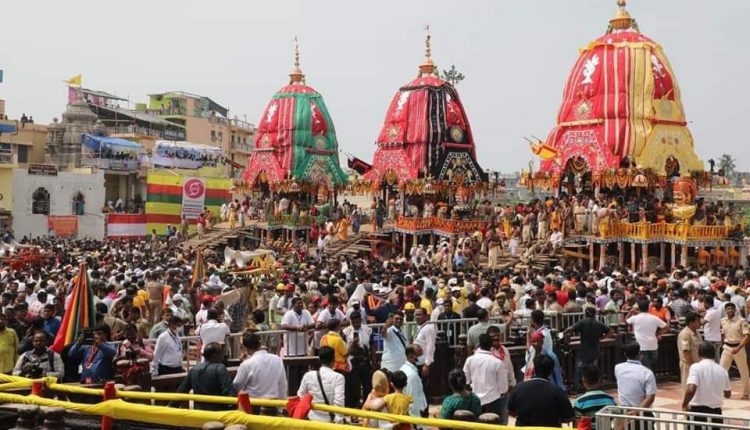 Puri: Sibling deities – Lord Jagannath, Lord Balabhadra and Devi Subhadra – were taken inside the Gundicha Temple in Odisha’s Puri town on Saturday evening after spending one day in their chariots in front of the temple.

The Lords were brought in their respective chariots, pulled by lakhs of devotees during Rath Yatra, to Gundicha temple on Friday evening. All the rituals were performed by the priests on the chariots for one day to allow the devotees to have darshan.

As per tradition, the ritual of ‘Sandhya Dhupa’ (evening prayer) of the deities was performed in presence of a large number of devotees on Saturday evening. Following this, the sibling deities were carried in ‘Gotipahandi’ (grand procession) inside the temple.

The Lords will be worshipped at ‘Adapa Mandap’ in the temple till the day of ‘Bahuda Yatra’ (return car festival) on July 9. As per the schedule of Rath Yatra this year, the deities will appear in ‘Sunabesha’ (gold attire) in the chariots after they arrive in front of Jagannath temple on July 10.

The ritual of offering ‘Aadhar Pana’ (a special drink) will be performed on July 11 and the Lords will be taken to be seated on ‘Ratna Singhasan’ (bejeweled throne) in the temple during ‘Niladri Bije’ ritual which will mark the end of Rath Yatra on July 12.