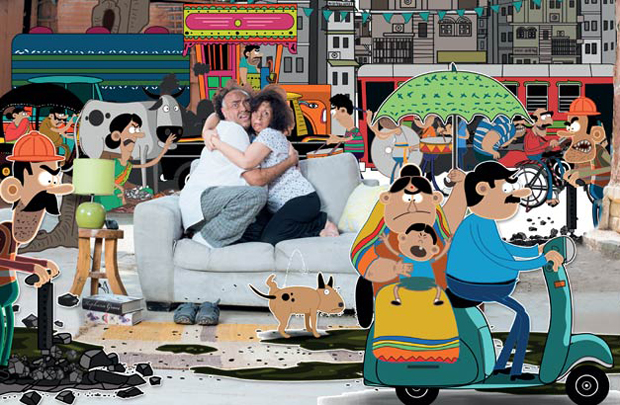 Bhubaneswar: Rabindra Mandap in city is going to host the English play ‘The Siddhus of Upper Juhu’, with theatre stalwarts Rajit Kapur and Shernaz Patel in lead roles, on Friday.
The play written and directed by Rahul da Cunha of Amul ad fame offers a satirical glimpse of how a city and its civic and civil issues can drive a sane man to the brink of a nervous breakdown.
Balvinder aka Bubbles Siddhu (Rajit Kapur), an ageing financial executive, and his Parsi wife, Behroze (Shernaz Patel) are a typical urban couple, who live on the 14th floor of a typical modern Upper Juhu (read Andheri) high-rise. But in spite of living in a fancy locality and having spent all their life earnings to buy this apartment, it is hardly the home they always dreamed of. The walls are paper thin and crumbling, the neighbours are annoying, the plumbing is a mess, the howling of stray dogs outside awakens them at midnight. Just when they think things can’t get any worse, the Siddhus are burgled and Bubbles is sacked from his job.


Though the plot is depressing, the play is not. The satire is realistic and the first half with some stellar dialogues and antics by Rajit is sure to tickle the funny bone.
Taking to an English daily, Rajit said people feeling pressurised by city life can relate to the play. According to Shernaz, it also talks about how a man deals with the situation when at home while the woman has to take up a job.
The actors, who have been doing plays together for past three decades, said they thoroughly enjoyed playing the characters of Bubbles and Behroze.
The programme is being organised by Zain Foundation as part of its annual fund-raising charity show.
Rabindra MandapRajit Kapur
Share FacebookTwitterGoogle+ReddItWhatsAppPinterestEmail