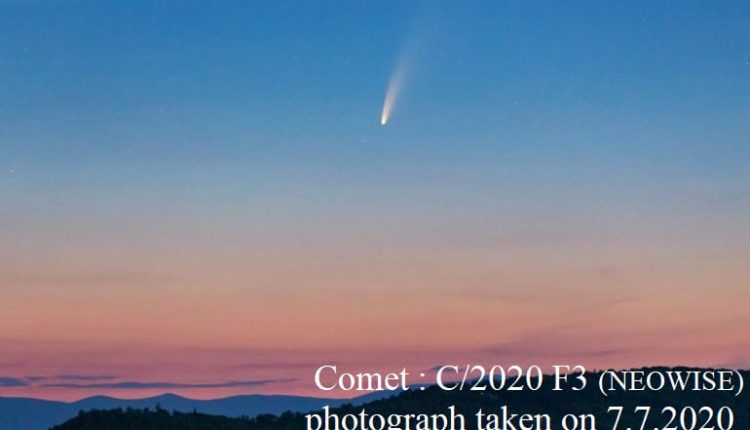 Bhubaneswar: Skygazers in Odisha and rest of India are in for a treat as a rare comet will be visible in India from July 14.

The C/2020 F3 NEOWISE, from the Kuiper Belt, has caught the imagination of astronomers and sky enthusiasts as it is zipping past the earth.

People in India and the rest of northern hemisphere will be able to see the comet in the skies from mid-July through the next couple of weeks. A pair of binoculars will be needed to view it in the northwestern sky at dusk as it is bright enough to be seen in a clear sky.

“There are right now many comets, say about 10, in the sky, but C/2020 F3 2020 NEOWISE is the first one of the 21st century to be visible through naked eye till July 23 as it will be closest to the earth on that day. This spectacular phenomenon will not be visible in the next 2000 years,” said Suvendu Pattnaik, Deputy Director of Pathani Samanta Planetarium, Bhubaneswar.

NEOWISE is a bright comet and its size is about 200-300 km,  comparable to a small town. A far better viewing perspective will be available in the evening sky starting around July 14, when it will appear low in the northwest sky (20 degree from horizon) for around 20 minutes. In the evenings to follow, the comet will rapidly climb higher in the sky and will be visible for a longer period, informed Pattnaik.

However, NEOWISE is a short-period comet with an orbital period of 200 years and was formed in the Kuiper Belt. Halley’s comet, which was seen 76 years ago, is also a short-period comet. Long-term comets like Hyakutake (1996) and Hale-Bupp (1997) were visible for 18 months in the sky and have orbital periods of 200 years. They were formed in the Oort Cloud.

“The span of their visibility is impacted by the tidal forces generated by the bulge and disk of our galaxy. Such gravitational disturbances can send these icy bodies on a path towards the centre of the solar system in a highly elliptical path. Thus they can enter the inner solar system from any angle,” he added.

Some comets break into small pieces as they come closer to the sun. Comet NEOWISE survived its closest approach to the sun, (perihelion) and raised hopes that it will become a tantalizing object for sky watchers after two medium-sized comets passed near sun early this year. The comets ATLAS and SWAN fizzled out after they crossed the sun earlier this year, crushing hopes of astronomers to see it with unaided eye.

“Originally, NEOWISE was not expected to get much brighter than ninth or 10th magnitude, making it accessible only to those with good binoculars or small telescopes. But on the morning of July 4, comet NEOWISE was visible clearly, surprising many, ” said Pattnaik.

“Perhaps one will find the most favourable conditions. Even a bright comet, like this one, can be obliterated by thin horizon clouds, haze, humid air, smoke, twilight glow, city lights, or moonlight, ” he added.

NEOWISE comet currently has two tails — one that is made of dust and another made of gas. As the cometary tails are created by the solar radiation and solar wind, they always flare out in the opposite direction of the sun. The coma (outgassing visible atmosphere around comet) can sometimes be larger than the sun in size. 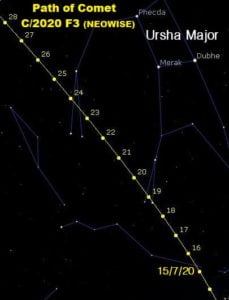 Here’s a timeline of the celestial dates with destiny for comet C/2020 F3 NEOWISE:

July 3: Reaches Perihelion of the Sun(43.4 million kms away from the Sun)

July 30: Passes into the constellation Coma Berenices and can be seen be seen at an altitude of 40 degrees near Ursa Major for an hour.

August 1: May drop back down below visibility of naked eyes.