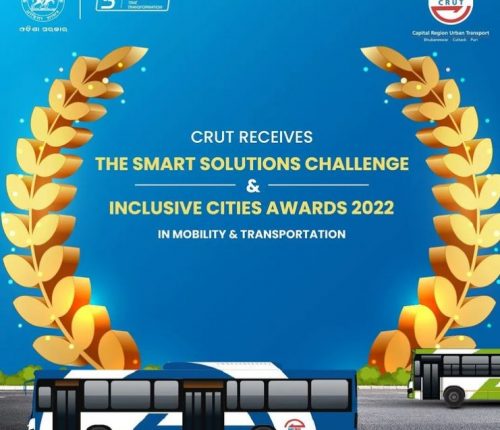 On getting the prestigious award, Vijay Amruta Kulange, MD CRUT, said, “Commuters who have chosen Mo Bus, have helped CRUT in bagging this recognition. Through its various initiatives, CRUT has ensured that its services are highly inclusive and user-friendly across all gender age and ability groups.”

The state government’s support has led to the services of CRUT becoming the mobility lifeline of the Capital Region of Odisha, he added.

“CRUT is always working to provide passengers with a better and safer travel experience. This award is a matter of pride for the entire State. This has been achieved due to the hard work and dedication of every member of the team who work tirelessly to provide excellent service at all times, especially our Sarathis who came forward and joined our crew,” said Dipti Mahapatro, GM (P&A) in a release.

Evolving according to the needs of the public, CRUT would introduce E-Buses and E-Rickshaws in the Capital Region of Odisha as per the Electric Vehicle Policy of the government soon. By reducing personal vehicle usage and using government provided public transport services of CRUT’s Mo Bus has resulted in improving consistent traffic problems in the capital region.

With the introduction of E-Rickshaws in the city that are spearheaded by women, transgender and socially disadvantaged people, CRUT has taken a step forward in enhancing the gender and social inclusivity in the mobility sector of the Capital, the release stated.

Centre To Set Up Cancer Hospital At NISER Campus In Bhubaneswar