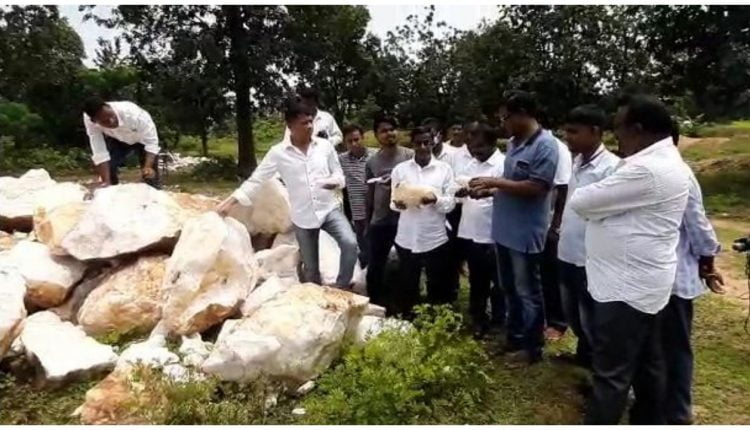 Malkangiri: Several mines barons of Andhra Pradesh and Telangana have set their sights on a hill of silica-based hard crystalline mineral white (quartz) stones at Kunanapali in Motu Tehsil of this district for quite sometime.

First explored by a contractor of Telangana, the valuable white quartz ofMotu has become the prized posession of many quarry operators in the neighbourhood. The easiest way to loot and smuggle valuable stones from the bordering district is to bribe a few tribals into collecting tons of stones from the hills.

The Malkangiri district authorities have woken up to the loss of truckloads of white quartz stones worth crores of rupees and the local Tehsildar has subsequently identified the spot as “prohibited area” after the mafias laid a temporary road to transport the valuables to Telangana and Andhra Pradesh, especially at night.

Quartz crystals are used to make oscillators for watches, clocks, televisions, electronic games, computers, GPS equipment and cell phones among other things. Although the crystals are not precious gem stones, they are valuable for their worth.

According to residents in the locality many officials of Revenue department are hand in glove with the quartz smugglers of the neighbouring states. Congress leader Pradip Majhi who visited the hill and villages near Motu on Sunday corroborated the allegation and demanded stern action against the smugglers.