Bhubaneswar: A SpiceJet aeroplane had to make an emergency landing at Hyderabad airport due to smoke inside its cabin and cockpit late Wednesday night.

According to sources, while the plane flying from Goa to Hyderabad was midair, the cabin was filled with smoke causing discomfort to the passengers for breathing. The smoke also spread to the cockpit.

After the pilots of the plane alerted the air traffic control tower of Hyderabad airport, necessary security arrangements were made and the plane landed safely and passengers disembarked through the emergency exit.

There were 86 passengers onboard the Q400 aircraft VT-SQB, NDTV quoted a Hyderabad airport official as saying. Due to the emergency landing, nine flights were diverted after the incident at around 11 pm.

A passenger on board the SpiceJet plane shared tweeted a photo of the smoke-filled cabin and two videos of the flight making the emergency landing at Hyderabad Airport. 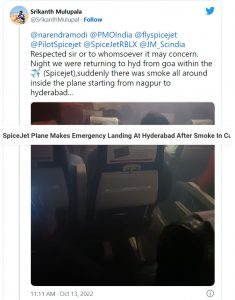 The Director General of Civil Aviation (DGCA) on Thursday confirmed the incident and said it has ordered a probe into it.