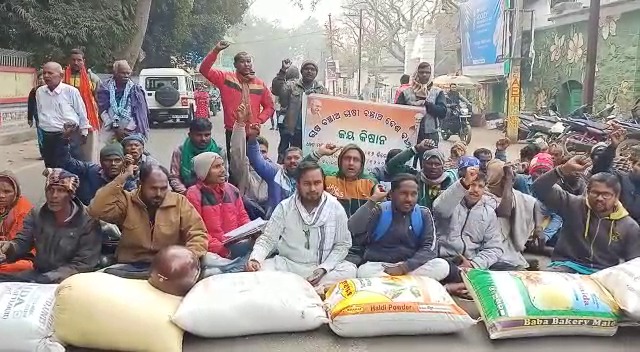 Bhubaneswar: Farmers staged massive protests across Odisha on Thursday by spilling paddy on the roads, alleging gross irregularities in procurement of their produce in the state.

While staging demonstrations under the banner of Naba Nirman Krushak Sangathan (NNKS) throughout the state, the slogan-shouting farmers also tried out gherao the offices of the collectors in different districts holding placards and banners.

Demanding procurement of unsold paddy from the farmers as per the MSP fixed by the Central government, the agitating farmers stated massive protests in Khurda, Bhadrak, Jajpur, Jagatsinghpur, Mayurbhanj, Keonjhar, Nayagarh and several other districts.

They alleged that rice mill agents, in collusion with government officials, are deducting 8 to 10 kg of paddy per quintal in the name of ‘katni-chhatni’ during procurement in mandis.

Apart from throwing paddy, the protesters also placed sacks of paddy on the roads demanding steps to end the alleged illegal practice in paddy procurement.

Claiming that the practice of ‘katni chatni’ at mandis had led to distress sale of paddy and shattered the financial condition of the farming community in Odisha, the agitating farmers accused the state government of being indifferent to their plight.

A report from Bhadrak said the protesting farmers entered the premises of the district Collectorate and staged protest by placing paddy sacks. Similar protests were also seen districts such as Khurda and Jajpur.

The agitating farmers also demanded immediate steps to increase the MSP of paddy saying the Odisha Assembly had in 2017 unanimously decided that farmers should be paid at least Rs 2950 per quintal of paddy in view of rising cost.