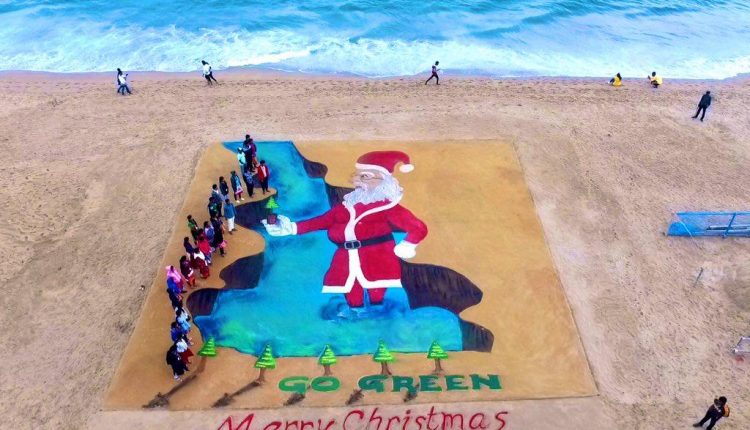 On the eve of Christmas, internationally-acclaimed sand artist Sudarsan Pattnaik attempted a World Record by creating a giant 3D sand Santa Claus on 2,500 sq ft area with the message ‘Go Green’ on Puri sea beach in Odisha on Tuesday.

“People can place their hands over the Santa Claus sculpture at a particular angle and distance and it will create an illusion of shaking hands with it,” he said.

Last year on December 25, he had sculpted a 30 feet high and 100 feet wide Santa Claus on the same beach using 10,000 plastic bottles and the sand art also found a place in Best of India Record. He had completed the sculpture with two Christmas tree in two days using nearly 800 tonne of sand and it sent out a message on curbing plastic pollution.

The noted sand artist was awarded Padma Shri, the fourth highest civilian award in India, in 2014 for his contribution to sand art. He has also been conferred with National Youth Award, National Tourism Award, People of the Year Award by Limca Book in 2009 and Young Indian leadership award by CNN IBN.

He had made it to Limca Book Of Records several times in the past.

Annual Plus II Exam Schedule To Be Out On Dec 27

Five Christmas Classics To Watch With Your Mates!