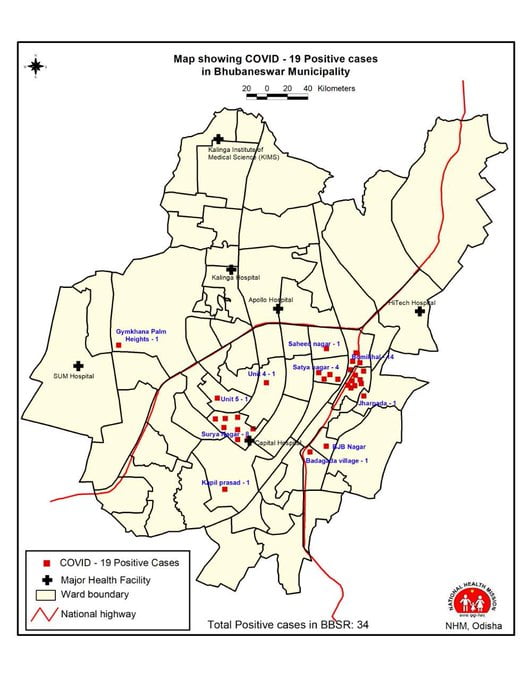 Bhubaneswar: Confusion over spatial distribution of COVID-19 positive cases in the Odisha capital came to the fore on Wednesday when the administration revealed that four cases had been confirmed at posh Satya Nagar. It was earlier shown as Bomikhal cases.

In the morning, the Bhubaneswar Municipal Corporation (BMC) sealed Satya Nagar in the heart of the city and declared it as a containment zone, though there was no confirmation from the state government about cases being detected from the area. The reason cited: It was necessary for active surveillance and contact tracing in view of the recent corona cases here. Some media channels linked it to the Bomikhal cases.

This was followed by two tweets by the Health and Family Welfare Department, clarifying that confirmed cases in Odisha stood at 42, which includes one death and two recoveries. It also released back-to-back maps, one Odisha with distribution of COVID positive cases and another showing spatial distribution of COVID-19 positive cases of Bhubaneswar.

The spatial distribution of COVID-19 positive cases put the numbers in Bomikhal  at 14, and those in Satya Nagar at four. This was possibly intended to explain why the area was declared a containment zone.

Till April 6, Bhomikhal reported 18 COVID-19 cases and almost all of them belonged to the same family, according to government tweets.

Adding to the Satya Nagar story, the administration said three of the four cases in the area could be linked to the primary Bomikhal family, which tested positive.

The government, however, is yet to disclose as to why Ward 64, covering revenue villages of Jadupur and Begunia, was declared a ‘containment zone’ along with Sundarpada on April 5, raising and apprehension and curiosity about the goings-on there.

As things stand, of the 34 cases made public by government so far, 14 belong to Bomikhal, eight are from Surya Nagar, four from Satya Nagar and one each from Badagada, Bharatpur, Saheed Nagar, Kapila Prasad, Unit V, Unit IV, Mahisakhal, BJB Nagar and Jharpada.