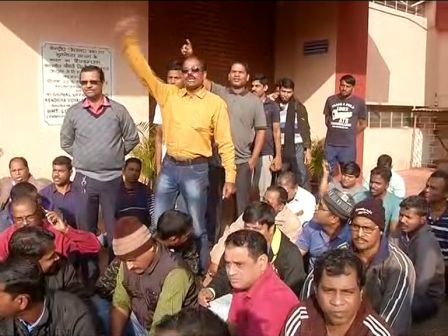 Bhubaneswar: A day after a suicide attempt by a girl student of Class XI of Kendriya Vidyalaya no-3 at Mancheswar, irate parents and guardians on Saturday gheraoed the office the deputy commissioner of Kendriya Vidyalaya Sangathan to demand action against the teacher concerned for allegedly harassing students.

According to reports, the girl was doing physical workout in the school playground on Friday when the physical education teacher (PET), Suryamani Patnaik, scolded her in abusive language and then beat her in front of other students.

Unable to bear the insult, the girl jumped off the roof of the school building and fractured her two legs and sustained deep wound on her chest. She was admitted to the ICU of a private nursing home in critical condition. Following the incident, the PET left the school.

Claiming that the PET’s behaviour had preempted the suicide attempt, an irate guardian alleged that she used to physically and mentally harass students . “She forcibly cuts the hair of students and makes them kneel down in the playground for hours. I had informed the principal about the PET’s rowdy behaviour earlier, but no action has been taken till date. We will meet the deputy commissioner today (Saturday) and submit a memorandum to demand stringent action against the PET,” he added.

On her part, school principal Priti Ray denied the allegations made by the guardians. “I have not received any written complaint against the PET. Yesterday, the members of the Parent-Teacher Association (PTA) had given me a letter and told me to talk to the PET for her behaviour towards the parents and guardians. But  there is no mention of action against the PET in the written complaint,” she said.

Cold Wave To Prevail In Odisha Till Dec 12: IMD