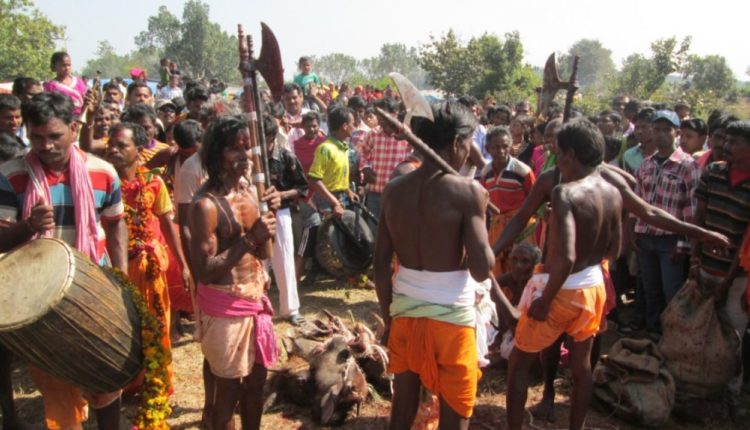 Balangir: The gory practice of animal sacrifice continues in the tribal parts of the state year after year.

On Tuesday, the famous Sulia Jatra kicked off with the sacrifice of hundreds of animals at Bada Khala in Khairguda and Sana Khala in Kumuria village of the district amid tight security arrangements and COVID-19 protocols.

To propitiate the presiding deity, devotees throng Khairguda village on the second Tuesday of Odia calendar month of Pousa every year to sacrifice animals and birds. They believe that offering blood of animals and birds to Sulia, their traditional deity, brings good harvest and prosperity.

It may be mentioned here that there had been a tussle between the district administration and Zilla Adivasi Sangha in the past following a 2005 Orissa High Court order to abolish such practice and mass killing of animals.

But, after the Supreme Court’s verdict in 2017 to respect tribal rituals and traditions, the district administration has kept itself away from opposing the animal offering. Ever since, the administration makes adequate arrangements to ensure law and order.

Odisha Among Top 3 States In Number Of COVID Vaccinations