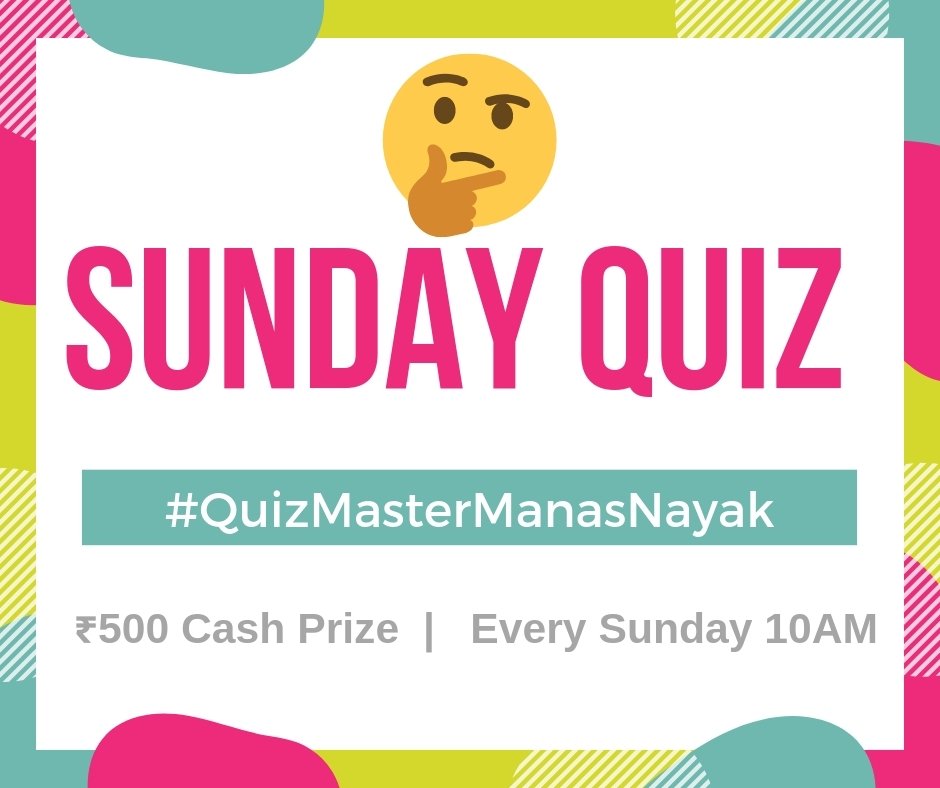 The all correct answer entries of the last week are from Sritee Samal, Ashish Verma, Shubham Jha and Mukti Swaroop Pradhan.

The lucky winner of the last edition of “Sunday Quiz” is Sritee Samal. Congratulations to you. Kindly share your bank account details at quizwithmanas@gmail.com

Here are the questions of this Edition of “Sunday Quiz”. Do send your answers by 11 PM on June 12 at quizwithmanas@gmail.com.

One Lucky winner among the all-correct answers entries will receive a cash prize Rs 500. All the best.
#KeepQuizzing #KeepLearning

1.When do we observe the World Population Day?

2.Which city in India is most affordable for Home buyers as per latest Quarterly Residential Asset Price Survey conducted by Reserve Bank of India?

3.Why PTI Reporter Justin Rao was in news recently?

4.”The Last Colour” is a movie on discrimination faced by widows in a male dominated soceity is recently in news.Who is the director & story writer of the
movie whom we better know for his culinary skills? (Subhransu Das an Odia is the cinematographer of the movie)

5.Which cricket team made it to the finals of World Cup after 27 years?

6.Who became the first Indian ever to win gold in the 100m race at University Games?

7.Which train will be the first train in the country to be operated by a private player as decided by Indian Railway?

Mr. Pranab Kumar Das, Chairman CBIC, India has won the election to the post of the Director, Compliance & Facilitation at the WCO for a term of 5 years.
He garnered 108 votes against the UK candidate who got 68 votes.

2. Who has been appointed as the as the director of the Institute of Economic Growth(IEG)?(Another Proud Odia Economist Professor)

3. Which TMC MP was in news for her alleged plagiarism from an article published in the Washington Monthly on 31st January,2017,called Warning Signs of Fascism?
(Zee editor claimed she borrowed her speech from this though later the author of the article Martin Longman gave her a clean chit with a Twitter post later.)

4. On whose honour, in India the National Doctors’ Day is celebrated on July 1?

Ans: In India the National Doctors’ Day is celebrated on July 1 all across India to honour the legendary physician and the second Chief Minister of West Bengal
Dr. Bidhan Chandra Roy

5. Which Kashmir born Dangal fame actress quit acting & came out with a statement,”my relationship with my religion was threatened” & been severely trolled in
social media for such controversial remark?

6. Which Indian middle order batsman declared his retirement from all form of cricket after being ignored by the team though he was in the official standby list for
the on going World Cup & not being sent as a replacement of injured Vijay Shankar?

7. Who has created a new record of highest number of centuries scored in a world cup by an Indian in the 50 over format of one day internationals?

8. CIA tweeted they were also affected by the outage, and joked that they didn’t cause it.They added,Did you try turning it off & on again?
What incident they were referring here?

9. In which city of Odisha, in a unique ritual, Sraddha ladoos are thrown at the devotees as prasad before the chariot is tugged during the Rath Yatra from Nandighosha?

10. Who among the following has become the first player in the history to score more than 500 runs and take 10 wickets in a single World Cup campaign?

11. Which scheme declared by the finance Minister of India during the Budget 2019 is to ensure fixed monthly pension to 10 crore unorganized sector workers?

Chandrayaan-2: Countdown Begins For India’s Unique Moon Mission! All You Want To Know

World Cup Final: Where Can It Be Won & Lost