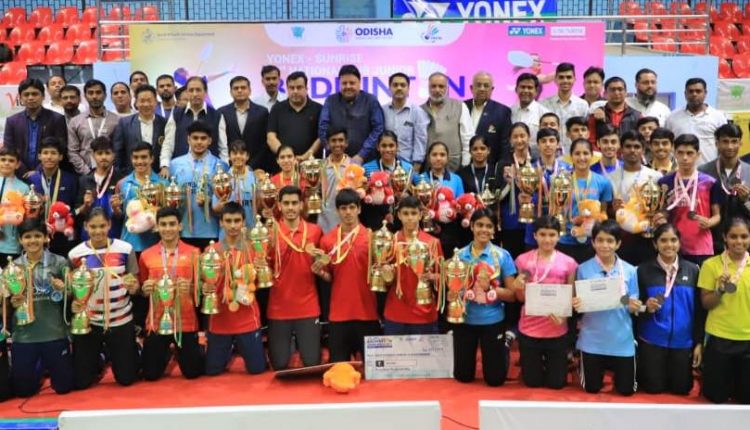 Bhubaneswar: Swetaparna Panda made host Odisha proud by winning the U-15 mixed doubles with Sathwik Reddy K of Telangana as her partner in the Yonex-Sunrise 33rd National Sub-Junior Badminton Championship 2019.

Incidentally, this was the first medal in national championship for both Swetaparna and Sathwik.

The Championship, which concluded at the East Coast Railway Stadium here on Sunday, saw budding shuttlers of Tamil Nadu, Rajasthan and Haryana sharing six out of a total of 10 gold medals.

Karnataka, Assam and Uttar Pradesh captured one yellow metal each, while remaining one gold was shared by Odisha and Telangana. Tamil Nadu also secured the silver medals, besides the two two gold in U-17 boys’ singles and U-15 girls’ doubles.

Haryana bagged the two gold in U-15 girls singles and U-17 girls’ doubles. The two gold for Rajasthan came in U-15 and U-17 boys’ doubles.

Odisha missed another gold as Ayush Pattanayak and his partner Suhas V of Karnataka went down fighting to Rajasthan pair of Himanshu Khatana of Shubham Patel in the summit clash.

Suhas, however, compensated his doubles defeat by emerging U-17 mixed doubles champion with Janani Ananthakumar. Asian Junior runner-up Tara Shah (Maharashtra) suffered biggest heartbreak as she lost in the finals of both U-15 and U-17 girls’ singles events.