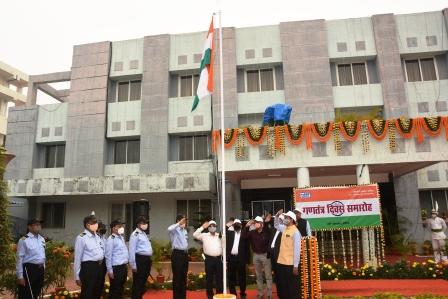 Bhubaneswar: The Talcher thermal plant of NTPC in Odisha has bagged 6th position in the all-India PLF ranking upto December 2020.

Regional Executive Director of National Thermal Power Corporation (NTPC) AK Pandey, in his message to the employees of Eastern Region 2 on the occasion of Republic Day celebration at the regional office, here, said in all-India PLF (plant load factor) ranking up to December 2020, two of NTPC Eastern Region stations are within best 10 power stations in India. Talcher Thermal is at 6th rank with PLF of 88.37% and Talcher Kaniha at 10th rank with PLF of 85.02%.

Pandey said the NTPC Group achieved its highest ever day gross generation of 1009 million units on January 18. The group aims to be 130,000-MW company by 2032 with diversified fuel mix, he added.

Referring to DDUGJY projects being implemented in Odisha by NTPC, he said almost 97% of the electrical infrastructure work is completed in nearly 17000 villages.

The 72th Republic Day was celebrated with patriotic fervor at NTPC Regional Office in Bhubaneswar and all the power plants in Odisha on Wednesday. The flag hoisting ceremony was conducted here with participation of large number of employees of Eastern Region II through MS Team. All necessary COVID-19 protocols and norms were observed during the function.

No Need To Prioritise COVID Vaccination Of Tokyo Olympics Participants: WHO Expert