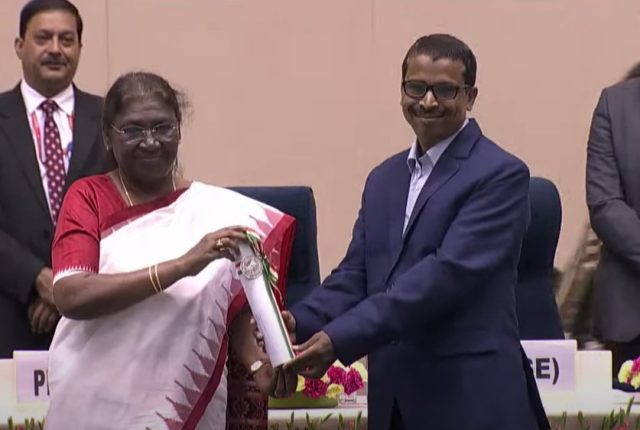 Bhubaneswar: Iswar Chandra Nayak of Odisha’s Puri on Monday, received the National Award for Teachers-2022 from President Droupadi Murmu on Teachers’ Day held at Vigyan Bhawan in New Delhi. He was the only teacher from Odisha to receive the President’s award.

Iswar, who teaches at Government Upper Primary School at Kanpur under Nimpara block of Puri district, took up teaching nearly 21 years back after resigning from a lucrative engineering job.

Respected as an ideal teacher among students as well as their guardians, Iswar was a brilliant student in his academic career and obtained an engineering degree from the Indian Institute of Handloom Technology (IIHT), Varanasi. Born in Bangurus Patana village under Nimapada block, Iswar did his schooling in Puri.

As a qualified engineer, he worked in reputed private companies across the country. After working as a professional engineer for eight years, Iswar resigned from the job to join as an assistant teacher in the primary school under the state government after completing a Bachelor of Education degree in 2001 at a meagre monthly salary of Rs 1,500. Though the engineering job was high paying, he got more satisfaction from teaching and shaping the future of children.

“I worked for many companies in the 1990s but that did not bring me peace and job satisfaction. So I decided to return to my native place to teach children and also academically contribute towards the promotion of the textile heritage of our state,” said Nayak, who had received the State Teachers Award of the Odisha government in 2016.

Besides teaching children, he set up a students’ knowledge centre in his village in 2017 where free computer education and career counselling are provided to the students.

With a natural talent for writing and an attraction toward literature, Iswar is also a well-known writer. He has authored 18 books including many on the textile heritage of Odisha and the school education system. His last book, ‘Aliaru A Aa’, published in 2021, deals with the ways in which marginalised children can be brought back to school.

His book ‘Weaves in Textiles’ has been included as a reference book in 10 IIHTs across the country. “For me, education and textiles go hand in hand. Both are equally important,” said Nayak, who runs YouTube channels ‘Teachers Odia’ imparting lessons on teachers’ training and ‘Chemistry Ganga’ to clear the chemistry fundamentals of students.

An alumnus of the Institution of Engineers, Kolkata, 50-year-old Nayak Iswar is also a State resource person for the School and Mass Education Department. He was chosen for the coveted annual award conferred by the Ministry of Education for his academic and non-academic publications. The award carries a certificate of merit, a cash award of Rs 50,000 and a silver medal.