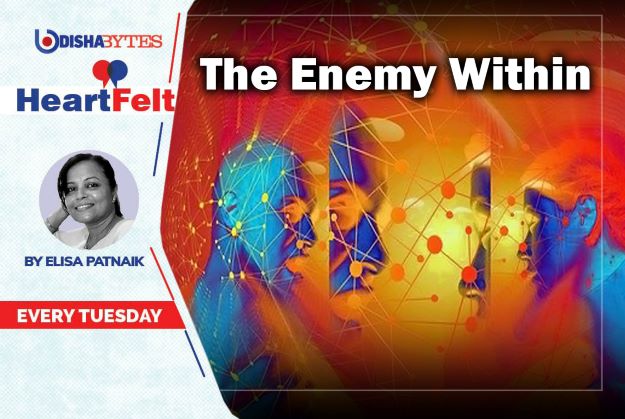 I remember an incident that took place in the streets of Bhubaneswar, close to my house. I was walking to my house from the post office when I saw a couple arguing fiercely beside a parked bike. The young woman was trying to explain something while the man seemed furious. Within a few seconds the man began slapping the woman, not one, not two, but continuously while the woman tried to shield herself unsuccessfully.

I ran towards them and shouted at the man to stop. The man, raging, asked me to stay away since this was their ‘private’ affair as the lady was his fiancée. I was stunned. The woman stood still, silently rubbing her reddened cheeks, tears streaming down her face, looking beseechingly at me to leave. When I told them I was calling the PCR van, the man literally dragged the woman on his bike and sped away. I wonder if the couple got married and how much of this ‘private’ affair being enacted in a public space was still continuing.

Most of the times, such ‘private’ affairs conducted within the four walls of a home or within families or close partners cause permanent physical and psychological harm to girls and women, even costing them their lives. The maid in my in-laws’ house has lost her hearing in both ears after being beaten by her husband. I have witnessed how a distant aunt ‘tolerated’ her husband’s physical abuse for years till she was able to leave him after the children completed their education. A young colleague shared how she used to be sexually abused by her favourite uncle every vacation and was unable to share her trauma, afraid that she would be disbelieved, as the abuser was the paragon of virtue and nicety in the family.

We all know that violence against women do not just happen in public spaces. Girls and women are increasingly unsafe in their most secure private spaces too. I doubt if there is a single person who has not heard, seen, experienced a case/s of domestic violence and sexual abuse within their families, friends and acquaintances and yet have chosen to stay silent considering this as their private, domestic affair. The abusers are mostly husbands, intimate partners, fathers, brothers, uncles, acquaintances – people with whom the victims were supposed to feel safe with.

But it’s within these four walls and among known that girls and women face some of the worst violence and abuse which tragically goes unreported, continues for years and results in death, permanent physical, psychological and emotional damage for the victims and survivors.

According to the recently released National Crime Record Bureau (NCRB) data, India saw a total of 4,28,278 cases of crimes against women in 2021 – a 15% rise from the previous year, among which cruelty by husband accounted for
the highest number of cases (32%). Globally too, one in every three women experience physical or sexual violence from their intimate partners. The latest National Family Health Survey (NFHS) data also indicate that 29.3% married
women in the ages of 18-49 years have faced domestic violence/or sexual violence. More than 38% murders of women are committed by current or former partners according to the NCRB.

However, despite the numbers, domestic violence is still the most under recorded crime in India. It takes tremendous courage to report abuse as the victims are often emotionally and financially dependent on their abusers. Moreover, the threshold for tolerance in domestic abuse is usually high as many victims are unable to comprehend it as an act of violence. Other family members, friends who are supposed to spot the signs of abuse and intervene think it is too private a matter to interfere.

Domestic violence by partners and other family members a spouse is the most common form of violence against women resulting in grave physical and mental injury. And yet, it has never really been considered as a critical public health issue
requiring medical treatment and services including mental health care. While physical violence with signs of visible physical assault or deaths are being reported now, others like marital rape, mental torture, female infanticide do not get the deserved attention.

Despite being subject to violence and abuse every day, many women are forced to stay with their abusive partners and families. In most cases, the relationship with the abusers along with the stigma and shame stops them from sharing their abuse experience and reporting it.

Also, the constant presence of the abusers gives them hardly any leeway to either escape the violence or report it. Worse, the victims are not believed and silenced by their family members.

Not a single day goes by without reading or seeing news reports on domestic violence against women. Dowry continues to be among one of the main causes of violence against women even today. Consider this case which fills me with rage and
despondency: Two days before she was found dead at her husband’s house in Kerala, 22-year-old Vismaya Nair reportedly sent a cousin photographs of a brutal assault on her by husband. Her abuse had been continuing for days due to ‘inadequate’ dowry. After one such assault, Vismaya had returned home to her parents but was back after a compromise. She committed suicide soon after unable to bear the constant torture.

While reasons such as – suspicion of infidelity, dark complexion, giving birth to daughters, not being able to bear children, wanting to study or work – are cited to trigger violence against women, it boils down to patriarchy and misogyny where men consider their right to violate and abuse girls and women. Slaps, shoves, burns, kicks and marital rape are all considered normal. Women experiencing domestic violence are more likely to have a chronic health condition. They also suffer from poorer mental health – depression, anxiety and the underlying trauma affects women, at both physical and psychological levels inducing a vicious cycle.

Women being asked to leave their marital home is another common abuse against women. For some, the physical, sexual and psychological abuse begins barely days after the wedding. The victims are left with only two options: adjust or leave.

Unfortunately, domestic violence is hardly seen as gender-based violence that requires medical attention in the way rape or acid attacks do. Families, neighbours and police are often reluctant to interfere in cases of domestic violence as it is seen as a private matter.

Women facing domestic abuse usually seek treatment at in orthopaedics and gynaecology wards of hospital but are rarely recognised as cases of gender-based domestic violence as healthcare providers aren’t trained to recognise, are biased or
are reluctant to get involved in “family matters”. Many times, the victims are often accompanied by family members who may even be the perpetrators.

While the law to some extent provides solution against domestic violence, women hesitate to seek help from formal institutions due to socio-cultural inhibition in seeking help, accepting the violence as a part of married life. Some women hardly recognise the signs of an abusive relationship and accept the situation as their fate or something which women need to tolerate, adjust and bear. In fact, parents, in-laws and families compel women to adjust, compromise and move on for the sake of their marriage and the future of their children. Even police and counsellors advise to sort out the matter between themselves.

Just reporting domestic violence is, however, not enough. Women who are courageous to walk out of an abusive relationship need financial, moral and legal support which is hard to get. Several women are unable to avail the support and facilities due to lack of accessibility, awareness and financial dependency on the abusers.

India’s response to violence against women including domestic violence has been largely punitive. The internalised patriarchy, gender discrimination and toxic masculinity enabling violence against women are hardly addressed. We have to increase the voice, agency and negotiating power of young girls and women through education, financial independence for them to get out of the vicious circle of patriarchy and violence. What particularly infuriates me is the way parents and family members accept and normalise the violence being perpetrated under their own roof.

The culture of silence on abuse in the name of honour and private affair is the biggest shame which we need to break.