This Muslim Boy Of Odisha Fighting For Rath Yatra In Puri 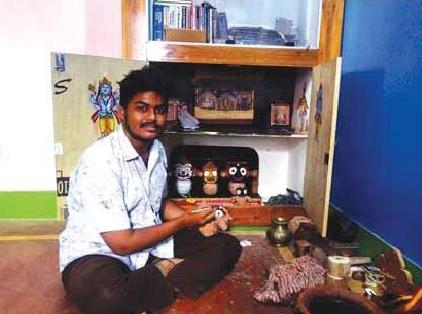 Nayagarh: After filing two petitions in the Supreme Court to conduct the Rath Yatra in Puri, Aftab Hussain, a Muslim student of Itamati area of Nayagarh district has not only drawn the attention of the people across Odisha, but also earned the name of Salabega II on social media.

Talking about his interest in the Jagannath culture, the 19-year-old Plus III final year Economics honours student of Nayagarh Autonomous College attributed it to the influence of his grandfather late Multab Khan.

“Despite being a Muslim, my grandfather had a vast knowledge of Ramayan and Mahabharat. He was instrumental in construction of the Trinath temple in Itamati in 1960. Apart from my grandfather, Botany lecturer of the College of Education and Technology at Itamati, Banshidar Sahu inspired me about the Jagannath culture. I was going to his house every day for tuition during my school days and he used to give me several books on Lord Jagannath,” Aftab said.

He also said his father Imdad Hussain, mother Rashida Begum and younger brother Anmol support him in worshipping the idol of Jagannath in his house. “I have not visited the temple as I am not allowed. I believe that I am a human being and there is one creator in the universe,” he said.

When asked why he did not object to the decision of the government not to celebrate the Eid during the lockdown, Aftab said Lord Jagannath and Rath Yatra have given the people of Odisha a special identity in the world.

Referring to the two petitions he has filed in the Supreme Court, he said the century-old tradition of Lord Jagannath should not be stopped. “I am confident that the verdict of the Supreme Court on Monday will not let down the people of Odisha,” he said.

On his future plan, Aftab said he wants to be an administrative officer and do more research on Jagannath culture.