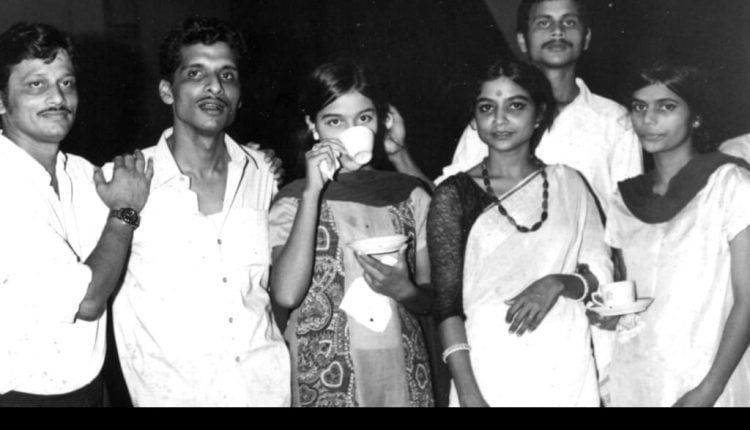 Bhubaneswar:  Sometimes, the song that becomes a hit and resonates with the audience today had actually been conceived much before, in the past. Many songs have a history. Their future success is decided at the time they were conceived. In other words, they are destined to be a hit.

Here is what Swarup Nayak said……

I was playing the role of Pabana in the movie ‘Sansara’. I had also written the song ‘Alo Kalasri Kie Tora Sua’ for this movie. This song has a history.

I had a parody, ‘Mu Ate Katakia Bada Penhua Tarakasia’. I had written that song following ‘Mera Naam Hai Chameli’. Akshaya Mohanty had heard that song. He loved the sentence ‘Katakia Tarakasia’ and he said to me, “Keep this line. It will be used later.” His suggestion came true. It was used later.

At the time of ‘Sansara’, he asked me to write a song. I wrote ‘Alo Kala Sari’ and ‘Katakia Tarakasia’ was used in that song.

Akshaya Mohanty used to help us while writing the lyrics of songs. He usually wrote at least half of one song.

In ‘Sansara’, he had written the song ‘Tora Phusula Phusuli Katha Sunibini Bhala, Jibi Pachhe Chakiri Kari Rourkela’. The Idea of this song came from the slums of Cuttack. At the time of Dola Purnima, the youth sing the song ‘Sangini Rasa Rangini Hele Pahila, Neijibi Tate Rourkela’. Akshaya Mohanty and I borrowed the word ‘Rourkela’ from that sentence. At that time, jobs were available in Rourkela and the youth used to go there, leaving their families behind.

There was another song in ‘Sansara’ – ‘Jage Jibana Re, Sabuja Sapana’. It was written by my elder brother, Sarada Prasanna Nayak. It was inspired by a Gujurati bhajan.

Akshaya Mohanty had lent his voice for ‘Sansara’. ‘Dheu Dheuka’ was sung by Trupti Das and Geeta Patnaik. But Akshaya Mohanty was not convinced and ultimately, Nirmala Mishra dubbed the song.

Call Him Mr Akshaya Mohanty, Not Khoka Bhai — The King…