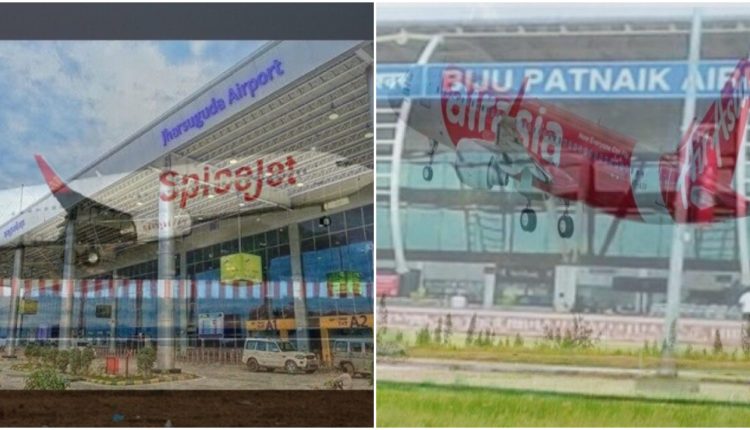 Bhubaneswar: Odisha has entered 2021 on a high note with three more commercial flights being added to the existing fleet this January.

Private carrier SpiceJet will be operating a Boeing 737 Mumbai-Jharsuguda-Bengaluru flight from Veer Surendra Sai Airport, Jharsuguda, from Tuesday (January 12). Later this month, AirAsia will fly one from Bhubaneswar to Pune.

“Amid the COVID-19 pandemic, people are looking for a safe way to travel and opting to fly. This has opened up avenues for the launch of commercial flights as is the case with Jharsuguda, which will now have air connectivity to seven cities,” Civil Aviation Joint Secretary Usha Padhee told Odisha Bytes.

The denizens have long been demanding for direct flights to IT hub Bengaluru and Mumbai. This flight will be available on four days in a week – Tuesday, Thursday, Saturday and Sunday.

The Bhubaneswar to Pune service is expected to take off from January 24 or 25, she informed.

Talking about the civil aviation growth potential of Odisha, Padhee said that the airports under UDAN (Ude Desh ka Aam Nagrik) scheme are demand-driven and have been listed by the airlines following four rounds of bidding. “This can also be gauged from the fact that now we have commercial flights operating from Jharsuguda to two domestic destinations. The SpiceJet is slowing building its hub in Jharsuguda which will streamline flight operations in future,” she said.

The Civil Aviation Ministry has been providing viability gap funding under UDAN for the other five flights, which is for a period of three years, besides funds for infrastructure development. “The state government has also been providing the much-needed push to the sector,” she said.

Odisha shares 20 per cent of the load (viability gap) under UDAN and contributes through tax relaxations and by providing security, among others.

Three more airports – Rourkela, Jeypore and Utkela are being developed under the UDAN -4.

“There have been delays as far as Rourkela is concerned which initially had a licence for only small planes. The taxiway and apron are now being strengthened and restructured to ensure the safety of bigger aircraft,” said Padhee.

Notably, the Ministry had earlier assured to launch operations in March 2020.

“We expect it to be completed in next six months,” she added.

The joint secretary said that the DG Civil Aviation had inspected the Jeypore airport and submitted the observations. “It can operate small aircraft and there will be bidding for it,” she said.

Utkela in Kalahandi district, however, is still in the construction stage, she added.

On Odisha’s demand for an international airport in Puri, Padhee said that Bhubaneswar receives only narrow-body aircraft and a separate one can be built on a bigger scale near the Pilgrim Town for the long-range ones. “International airports are being built within 60 km distance. For instance, the Hindon Airport which is around 50 km from Indira Gandhi International Airport in New Delhi. London has multiple airports. This proposal has potential,” she said.

Padhee further added that this will also boost tourism in the state, allowing easy travel for people around the globe to one of the ‘Char Dhams’ of India.

Spice Jet is slowing building its hub at Jharsuguda, where flight operations have grown since being inaugurated in 2019. It is for the first time commercial flights from the western Odisha town,