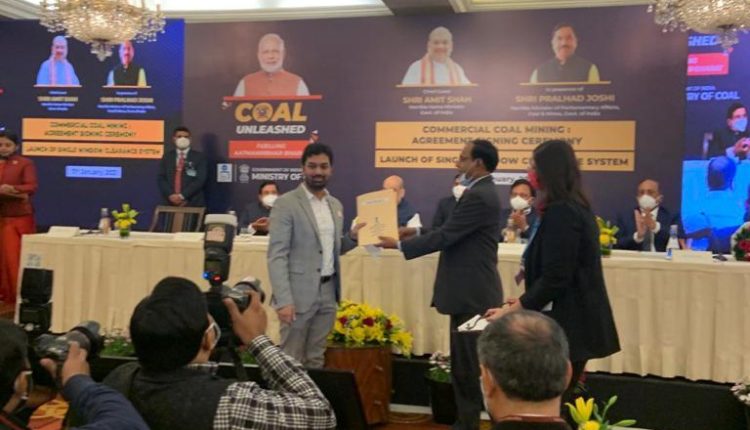 New Delhi: Odisha-based Yazdani International Pvt Ltd was among the 19 successful bidders to sign MoU at a function in New Delhi on Monday.

Yazdani, which is part of Serajuddin Group, had bagged Marki Mangli II in Maharashtra at a premium of 30.75 per cent. By winning the bid Yazdani became the first company from Odisha to bag a coal block outside the state.

At the MoU signing ceremony graced by Union Home Minister Amit Shah and Union Minister for Coal and Mines Pralhad Joshi, Shah launched the Single Window Clearance Portal of Coal Ministry. The unified platform facilitates grant of clearances and approvals required for starting a coal mine in India.

At the event where agreements were executed with successful bidders of India’s first ever commercial coal mine auctions, Shah said commercial coal mining auctions will now facilitate small and medium industries to receive coal supplies easily.

The success of India’s first ever commercial mining auctions will pave the way for the Aatma Nirbhar Bharat as it will help reduce India’s coal import by about 20 per cent.

The commercial coal mining auction process will open the way for development in Central and Eastern tribal areas of the country. Prior to the Modi government, Eastern India did not develop at the same pace as it should have, compared to Western India, he said.

“Coal sector has witnessed massive transformation under the dynamic and decisive leadership of Prime Minister Narendra Modi. Single Window Clearance Portal is in the spirit of Minimum Government and Maximum Governance. It would be a milestone for Ease of Doing Business in the Indian Coal Sector,”  Joshi said.

“We have reformed the coal, and now coal will transform the nation,” said Joshi.

Joshi informed that the next tranche of commercial mines auction will be launched this month and stressed that further rounds will continue thereafter.