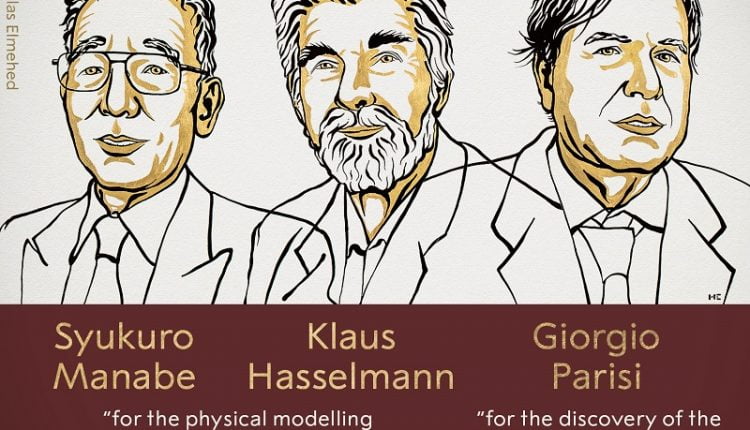 The Nobel Prize for physics has been awarded to three scientists Syukuro Manabe, Klaus Hasselmann and Giorgio Parisi  of Japan, Germany and Italy respectively.

“The three jointly won the 2021 Nobel Prize for groundbreaking contributions to our understanding of complex physical systems,” announced Goran Hansson, secretary-general of the Royal Swedish Academy of Sciences.

The announcement was made a day after they announced the names of winners of the coveted prize in the field of medicine.

Manabe and Hasselmann were cited for their work in “the physical modeling of Earth’s climate, quantifying variability and reliably predicting global warming”.

The second half of the prize was awarded to Giorgio Parisi for “the discovery of the interplay of disorder and fluctuations in physical systems from atomic to planetary scales.”

Last year, the prize went to American Andrea Ghez, Roger Penrose of Britain and Reinhard Genzel of Germany for their research into black holes.

The Nobel Prize in Physics is awarded by Royal Swedish Academy of Sciences, Stockholm, Sweden for contributions in the field.

The prestigious award comes with a gold medal and 10 million Swedish kronor (over $1.14 million). The prize money comes from a bequest left by the prize’s creator, Swedish inventor Alfred Nobel, who died in 1895.

BREAKING NEWS:
The Royal Swedish Academy of Sciences has decided to award the 2021 #NobelPrize in Physics to Syukuro Manabe, Klaus Hasselmann and Giorgio Parisi “for groundbreaking contributions to our understanding of complex physical systems.” pic.twitter.com/At6ZeLmwa5

Was Aryan At Wrong Place, At Wrong Time? SRK Asks Friends Not To Visit Mannat

India Offers A ‘Bouquet Of Hope’ To World: PM At World Economic Forum

Fact Check: Can You Be Infected By Omicron Variant Twice?