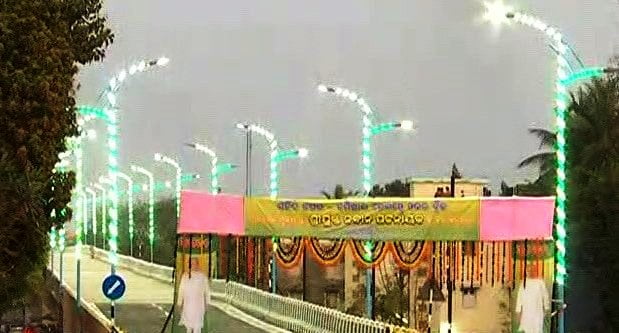 Construction of the flyover began in 2012 at an estimated cost of Rs 35 crore but it was completed with a revised expenditure of Rs 44 crore. There was inordinate delay due to land acquisition problems and two mishaps.

The flyover, including approach road, has a total length of 1.541km and a 7.5m width.It flyover will open three-way traffic, connecting people from Rasulgarh to Saheed Nagar to Bomikhal. It will ease traffic burden on the busy Puri-Cuttack state highway and be a saviour for those who wait for hours at Saheed Nagar railway crossing.

The PWD and ECoR signed an agreement to execute the project in 2008-09. The work started in 2012-13 with a deadline of 2015-16. However, land acquisition problems on the Saheed Nagar side and an extension plan on Bomikhal side delayed the project. It got a fresh deadline of 2016-17, but due to two back to back mishaps, it was delayed once again.

# Third deadline was March, 2017 after extension towards Bomikhal was planned

On September 10, 2017, a 10-meter-wide slab fell off the flyover leaving a person dead and several others injured. The state government suspended an executive engineer, an SDO and a junior engineer of the works department for gross negligence of duty. On October 10, 2017, the government blacklisted Panda Infra Pvt Ltd, the executor of the project, holding the agency responsible for the mishap. On the night of May 3, 2018, in another mishap, a retain wall of the flyover collapsed, leaves one dead and four injured. It was then that PWD was entrusted with the work.

The flyover has 20 pillars on Bomikhal side, 16 pillars on Rasulgarh side and another 18 pillars on Saheed Nagar side. The authorities have also installed LED streetlights, both on the flyover but also on the approach roads down the lane.