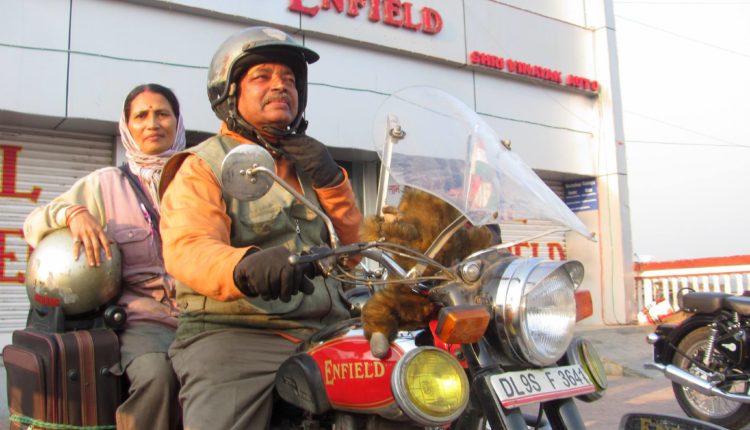 Bhubaneswar: The world belongs to those who wish to receive it with open arms, say Durga Charan Mishra and his better half Jotshna.

Talking about his bike rides, retired officer Durga Charan Mishra said he took the first bike ride in 1999 and it was a solo trip.

A proud owner of Royal Enfield, Durga describes his journey as the best part of his life so far. “We have travelled to the highest snow peaks of the Himalayas where nature threw several challenges, vroomed into the dense forests of North East and the most deserted places of Rajasthan,” he says. These trips help him in understanding the country’s diversity better, he says and we can’t agree more.

The expeditions opened their minds in myriad ways and brought out the beauty of the diversity of Indian culture in ways that touched their hearts. Ladakh can be the dream biking destination in India and people there are very cordial. Riding through Kerala is an unforgettable experience – the food and its nature. Kolli Hills is a scenic destination in Eastern Ghats of Tamil Nadu. “The hills are famed for their 70 continuous hairpin bends, which are more than enough to get you all excited,” he laughs.

With immense beauty, Western Arunachal Pradesh is one of the best places for biking in India. The rich culture of Rajasthan and the hospitality of the people of the state gives an opportunity to learn about living life without modern amenities. In Gujarat – Rann of Kutch is nothing less than a proverbial diamond in the rough where both white salt desert and salt marsh welcome you, says the sturdy 69-year-old senior.

The reason Mrs Mishra (Jotshna) started accompanying him from the second trip onwards was – care and concern. “During my first 57-day trip, I could not be constantly in touch with my family – including son Anupam and daughter Anusha – as there were no mobile phones then and even phone booths were scattered. My well-being worried them. As I was planning the second trip in 2002 Delhi to Kahardungla under the “World Peace Expedition” supported by Gandhi Darshan Sameet, Raj Ghat, Jotshna said she will be accompanying me and did not want to hear a no.”

Ever since we have been each others strength, he says. “Our children keep track of our journey through GPS,” he adds.

The trips, which have always been for a cause, so far have been etched in their memories with moments to cherish for a lifetime. “The expeditions are not just about the thrill of travelling but also planning and discovering routes. Every single day is a new start for us.”

Some surreal experiences that remain are riding through heavy rain or snowfall,  passing through regions where they did not know the language. These memories have been preserved in the form of pictures and videos, he adds.

Their journey has been a mix of easy, pleasurable rides and tough, challenging stretches. Every ride comes with a challenge, some pre-assumed and some unassuming, and that’s what makes the journeys worth looking forward to. He says, “We have faced many obstacles right from tough riding conditions to mechanical malfunctions, but the joy of riding has always kept us going,” he adds.

The cherry on the cake is my wife. “I consider myself as one of the luckiest people alive as my life partner is not a rider but she knows everything about motorcycling and is a great planner which is an added bonus in our relationship,” he adds

“One bad experience we faced was during our travel from Imphal to Silchar. The road was mostly empty and we didn’t come across a single traveller. About 15 km before reaching the Assam border, three highly inebriated youths appeared out of thin air and stood in front of our bike with guns. They fled with everything they could lay their hands on vanished.”

Is rest on the mind after the global disaster of COVID-19? Durga laughs it off.

The Mishra couple is looking forward to a new beginning after COVID-19 and fulfilling their travel dreams. They plan to venture into the tribal hinterlands and catch up with the organic lifestyle of the people. By this, he means tribals in every part of the country, not just Odisha.

This is the senior couple’s way of celebrating life and be one with nature. After all, you have only one life to live and it is a determined mind that decides your path not the natural biological process of ageing, he says.