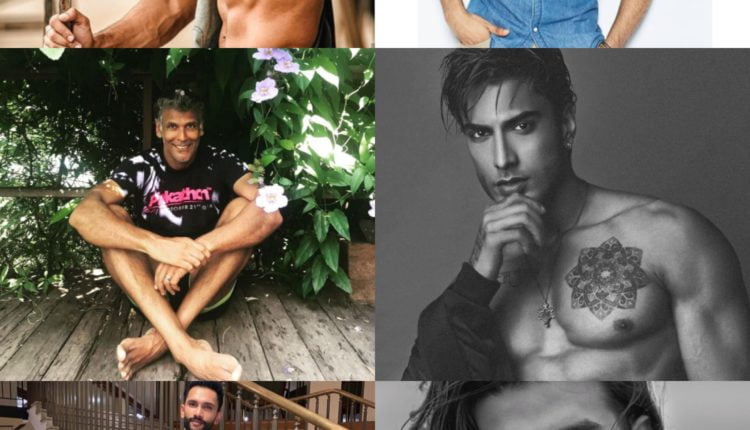 Mumbai: India has produced many male models in the fashion industry which was dominated by women not long back. They are not only doing well for themselves but have turned role models for others.

Here is a look into top Indian male models who have created a niche for themselves and are inspiring the youths who dream to make it big in the modelling world.

It changes you for ever, but you are changing for ever anyway. Stories do not change, only the lives they live in do. Every step in life must be cherished. Tough is the one and patience play the key. And easy are the ones when there is fun and constant success but handling both with conscious effort and understanding of it being certain to happen is a must. No matter what it is. Keep pushing Keep smiling. Have a Fantastic day ! Thank you Christley for Making this suit @a.fernsdesignerstudio

The 30-year-old model from Hyderabad was struggling in the fashion world until he won Mr India 2015 and created history when he was crowned Mister World in 2016. He was the first-ever Asian to win the contest. Since then, he never looked back.

Keep seeing this pop up on my timelines every once in a while 🙂 its 25 years old, at that time no social media no internet either I think ! wonder what the reaction would have been if it had been released today 😋 . . . #flashback #timelapse #blackandwhite #nude #photo

The 50-year-old is considered one of the pioneers of man modelling in India. He has established himself as a ‘Supermodel’ and many youngsters look up to him as inspiration. Many models from industry still get complex with Milind’s charm and fitness. He has also worked in several Bollywood and international films.

Prabh Uppal is a young and glamourous model from Ludhiana, Punjab. Initially, it was difficult for him to break into the modelling world but with his looks, sharp features and superb body took him to top model league. Prabh Uppal has done modelling for ace designers like Tarun Tahiliani, Anita Dongre, Sabyasachi and Manyavar.

The 34-year-old model participated in Gladrags Manhunt and Mega Model Contest in 2006, and won the second runner-up title.
After this, he became a household name in the fashion industry. He is one of the winners of Elle (India) fresh face of 2010. Gaurav was featured as one of the fittest male in Supermodels by Men’s Health magazine in 2011.
Vogue India in 2013 declared him as one of the most desirable Indian men. He has worked with Manish Malhotra, Rohit Bal, Tarun Tahiliani, Raghavendra Rathore and walked for Lakme Fashion Week, India Fashion Week, Indian Couture Week, Amazon India fashion week, and many more. He has represented India in the international platform as well.

The 31-year-old model is from New Delhi. He is the winner of TV reality show Dadagiri (season 2) on the channel Bindass and appeared on MTV Splitsvilla in 2012.

This young talent got recognition after he bagged Mr Delhi Times title, Rubaru Mr Inida 2016. He also represented India at Mister International 2016 in Bangkok. He has walked for designers like Rohit Bal, Tarun Tahiliani, Shantanu & Nikhil, Pawan Sachdeva among others.

The young lad is very popular in the glamour world. The star boy is the winner of Mr India World 2014 and Asian Supermodel 2015.

New Rules For Domestic Travel Amid Corona Crisis; What You Need To Know

Delhi Fruit Seller Gets Rs 8 Lakh In Donations After His Mangoes Worth Rs 30,000 Are Looted