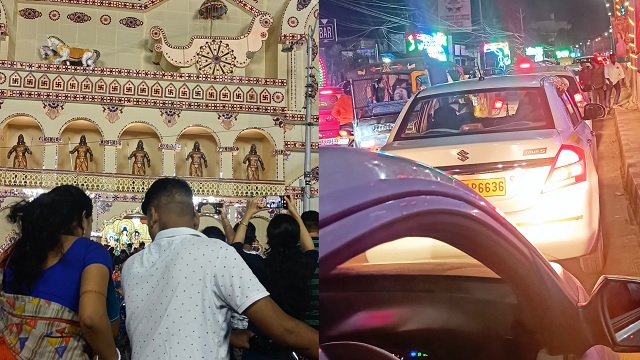 Bhubaneswar: From pandal hopping and shopping with family and friends to dancing to the beats of dandiya, the people of Odisha capital are in a festive mood and making the most of their vacation this Durga Puja.

The traffic flow across the roads in the capital city came to a standstill at several junctions on Monday night due to heavy rush of vehicles heading towards puja pandals on the day of ashtami.

There was a heavy jam on the road from Nayapalli Durga Puja mandap to Rasulgarh via Jaydev Vihar and Acharya Vihar. The traffic congestion continued from Rasulgarh to Kalpana Square via Bomikhal, Jharpada and Old Station bazaar pandals. A similar traffic situation was also noticed at Rupali Square near Sahid Nagar puja pandal and in the Old Town area.

There was, comparatively, less traffic in the Baramunda area due to the huge availability of parking space inside the ground.

The Commissionerate Police claimed to have roped in a huge platoon of forces for smooth flow of traffic, but high number of vehicles, lack of driving discipline and parking spaces for vehicles near the puja pandals seemed to have led to chaos on the city roads even after midnight.

Ambulances also could not find their way due to the heavy traffic situation on the main roads.

New Hostels, Quarters For Wardens To Come Up In BJB College In Bhubaneswar