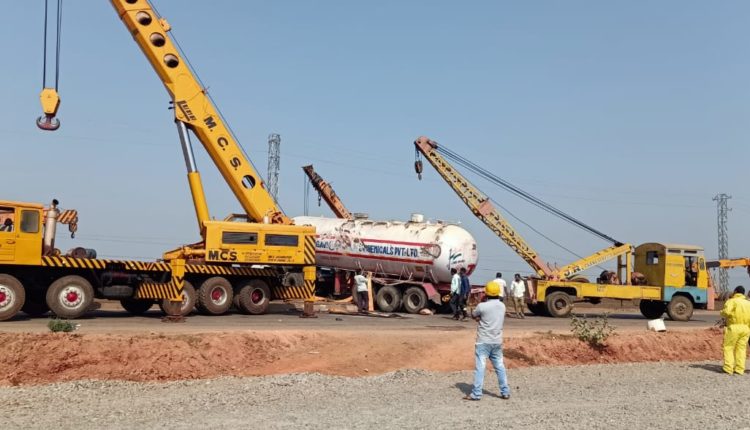 Berhampur: Normalcy in traffic movement was restored on the National Highway (NH) in Ganjam district after the gas tanker, which had turned turtle on Monday, was removed from the spot on Tuesday.

The tanker carrying ammonia gas overturned between Laxmipur and Suryanarayanpur under Ganjam police station while it was on the way to Visakhapatnam from Paradip.

The tanker turned turtle after its driver could not see a diversion road near a culvert under construction, police said. “We have detained him and two helpers,” police said.

The villagers of the nearby areas were relieved after the tanker was removed safely without any tragedy. However, a long queue of vehicles to a distance of about 25 km were reported upto Balugaon as those were stopped from plying for almost 12 hours between Berhampur and Bhubaneswar.

The tanker was removed under the supervision of the district administration by chemical experts of Grasim Chemical Industries situated nearby with the help of five cranes, sources said. Five fire tenders were also kept ready.

Remove Age Bar For Disabled, Include All Categories For COVID-19 Vaccination: Activists