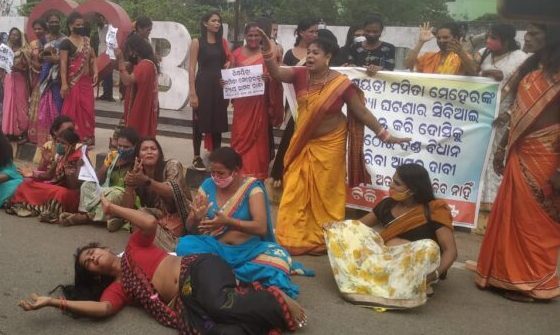 Bhubaneswar: Transgenders have taken to the streets in the capital city seeking justice for Odia lady teacher Mamita Meher, who was brutally killed and buried in Odisha’s Balangir.

Holding placard and shouting slogans, they sat on a dharna at Master Canteen Square demanding action against Minister Dibya Shankar Mishra for his alleged involvement in the incident and CBI probe into the case. They also burnt effigies of the minister and police.

It may be mentioned that body of Mamita was exhumed Mahaling stadium on October 19. A day later, police arrested the main accused Govind Sahu, who had absconded from police custody on October 17 night. Interrogation into the case is on.

Green Diwali: Orissa HC Leaves The Decision On SRC; Next Hearing On Nov 1