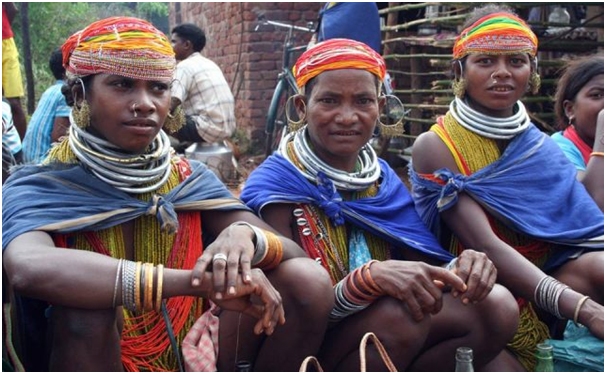 The state is stitching together a development agenda for 2036 – towards hundred years of Odisha state formation. FRA (Forest Rights Act) presents an opportunity to set up a new paradigm of development for tribals and forest dwellers by securing their legal rights and empowerment of the Gram Sabhas to conserve and manage forests. I consider a tribal as the ‘original’, an unspoilt me, who is naturally progressive and much more pristine. The term Adivasi, coined in the 1930s is derived from the Hindi word ‘adi’ which means of earliest times or from the beginning and ‘vasi’ meaning inhabitant or resident. Since prehistoric days Odisha has been inhabited by various tribes. It is well known that Odisha had been inhabited by tribes like Saura or Sabar from the Mahabharata days. Saura in the hills and the Sahara and Sabar of the plains continue to be an important tribe distributed across Odisha.

Several pre-historic sites have been excavated in Odisha since the Britishers. Kaliakata of Angul, Kuchai & Kuliana of Mayurbhanj, Vikramkhol near Jharsuguda, Gudahandi and Yogimath of Kalahandi, Ushakothi of Sambalpur, Similikhol near Bargarh are to name a few. The tribals can’t ever imagine ditching their forests. It is ‘their’ forests simply because they have been the traditional Forest Dwellers and habitants. With complicated definitions one convolutes the simplicity of forest landholding. We have remembered forest only when we seek from the forest, never when we want to contribute to the forests. I don’t remember having ever contributed anything to a forest? Minerals deposits, forest produce, land, oxygen, life is what forest gives us. What have I given to the forest except complications, politics & fight over resource booty. But a tribal stand for purity and guilelessness and we are fortunate to be cohabitating with them in this world.

Things have come to such a pass that they have to assert their rights over the forestland over which they were traditionally dependent. So FRA is crucial to the rights of tribals and forest dwellers in India. The notification of Rules for the implementation of the Forest Rights Act, 2006 on 1st Jan 2008 has provided the legal sanction to the tribals and other forest dwellers. The Indigenous peoples’ rights to lands, territories, and resources have both individual and collective connotations. Collective farming is common for tribals as a practice where various types of agricultural production are aggregated in which multiple farmers run their holdings as a joint enterprise. Long before we conceived farmer producer organisations or cooperatives, tribal communities have been engaging jointly in farming activities. The annual trade in forest produce in India is estimated to be well over Rs 50,000 crore. Before FRA was legislated, the trade was almost entirely regulated and controlled by state forest departments, which used to sell these goods through contractors, traders and contractors for industrial use such as beedi making or paper and pulp manufacturing. Tribals were paid wages for extracting the forest produce and substantially lower shares of revenue in some states. Instead of producers, they were agriculture labour in their own community lands. CFR rights should enable communities to use, protect and manage large areas of their customary forests and resources. The FRA was aimed at snapping the monopoly of forest department and contractors and to recognise rights of tribals and other communities to manage forests — a practice legalised in many other forested parts of the developing world where indigenous people have traditional rights. But the FRA Act has also been perceived as a ‘dangerous tool’ for many as it ushers in greater democracy and empowers gram sabhas to decide the fate of the forests and allow or reject the diversion of forests for purposes like mining or other developmental projects. The government’s state-level monitoring committee (SLMC) for FRA Act bestowed upon the government body Vana Surakshya Samiti (VSS) additional rights to manage forest resources and decided to co-opt members for various committees. This smack of paranoia. In the past attempts were made to dominate the FRA process with VSSs, formed by the Odisha forest department, to get rights over community forests which would take away power from gram sabhas as these VSSs are mostly controlled by forest officials. The SLMC’s decision (sometime back) to make superintendents of police district-level committee members and sub-divisional police officers members of sub-divisional-level committees violates the FRA and its rules. This is a violation of FRA 2006 and the Forest Rights rules as there is no provision or scope in the FRA of the Forest Rights Rules to co-opt any additional members. Odisha is one of the few states that has recognized both Individual Forest Rights (IFR) and Community Forest Resource (CFR) rights.
By February 2017, 595475 & 30223 claims were filed at Gram Sabha Level for ST & OTFD (Scheduled Tribes & Other Traditional Forest Dwellers) respectively, of which titles distributed were 409989 & 628. 360401 & 490 hectares is the extent of Forest land for which titles distributed for ST & OTFD. In Odisha, less than 7-8 % of the state potential for rights recognition for over 25 million tribals and other traditional forest dwellers on nearly 6 million acres of land has been achieved under Forest Rights Act (FRA). This has a direct bearing on the state’s security. FRA not only revives the PESA Act, 1996 enacted for the Scheduled 5th area, but it also extends the provisions of PESA even to non-scheduled area empowering the Gram Sabha as `Gram Sabha Sarkar’ – the decision maker of its own affairs and custodian of its own resources. PESA is the Panchayats (Extension to Scheduled Areas) Act, 1996 which is a law enacted by the Government of India for ensuring self-governance through traditional Gram Sabhas for people living in the Scheduled Areas of India. Governance and development in the forests rest completely on the inclusion of the dwellers. And if there is no development or empowered gram sabha Sarkar (village council self-government) the state could suffer the loss of resources, peace and inclusive growth.
The recognition of high numbers of Individual Forest Rights (IFR) titles should not be used by any government as a land distribution scheme to gain political mileage. The enactment of CAMPA Fund Act, 2016 and the ‘Ama Jungle Yojana’ should be done carefully not to impinge upon the authority of Gram Sabha recognised under FRA. All the forest land should be demarcated under actual occupation of the tribals and forest dwellers and correct IFR titles should be issued. There needs to be a protracted awareness drive at the community level so that the tribals can reclaim the area which is not issued under the IFR titles. This would go a long way in strengthening their sustained livelihoods. Many CFR claims are pending in the tribal districts. Claims are pending mostly in the mining districts of Sundergarh, Keonjhar, Koraput, Rayagada which has often induced self-declaration of Community Forest Resource areas by Gram Sabhas in increasing numbers. The districts should take this up on priority because this might lead to skewed resource allocation and volatile law and order situation at the communities.

The hapless tribals should not be hounded because they are the custodians of the world’s largest mineral resources. Even today, with all their possession, they are the most neglected. The Supreme Court verdict would decide the fate of over two million forest-dwelling families facing one of the world’s largest mass eviction. In a week’s time the apex court would decide whether to uphold its earlier eviction notice towards all households living in protected forest areas whose claims to the territory under the FRA have been denied.

The tribal leaders say that the FRA otherwise provides protection to about 110 million adivasis in India who have historically lost out the most as their lands to fuel the country’s economic growth in the second half of the 20th century.

The vision for Odisha 2036 should devote unprecedented focus to provide tribals the dignity they deserve, richly. They are the children of Nature, the natives. We are the visitors and we should know our place. Let’s learn to be with the ‘originals’, at least in hundred years of Odisha’s formation.

We are, because they are.

Disclaimer: (The views expressed in the articles are that of the writer and do not necessarily reflect that of the web portal)