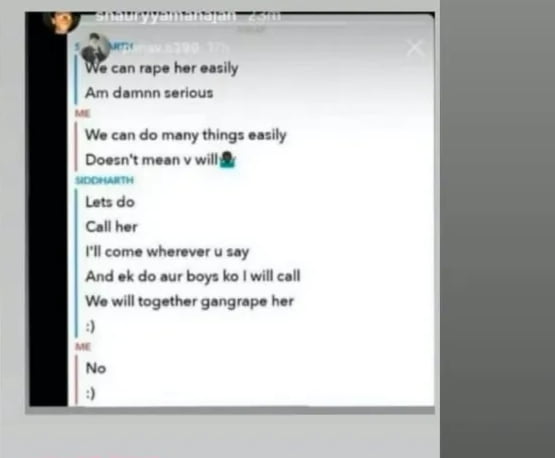 New Delhi: Here’s a fresh twist to Delhi “Bois Locker Room” Instagram group case. Investigation has revealed that a girl had used a “fake identity of a male and suggested in the chat group, a plan to sexually assault herself” so as to “check the reaction of the boy and the strength of his character”.

One of the screenshots was a viral Snapchat conversation between two individuals suggesting ‘rape’ of a girl. “Investigation revealed the Snapchat conversation is actually between a girl and a boy in which the former is sending chat messages through a fictional Snapchat account named ‘Siddharth’,” explained DCP of Cyber Cell Anyesh Roy on Sunday.

These screenshots are not linked to the Bois Locker Room case but were circulated along the same. No FIR is being filed as both are juveniles and “her intent was not malicious”.

Roy revealed that the boy “declined to participate in the sexual assault plan’ suggested by the girl (posing as a boy) and stopped responding to the chat”. The boy took a screenshot of this conversation and sent it to his friends and the girl. One of his friends posted it on Instagram.

The girl reportedly confessed to the police about sending the texts under a fake ID.

In the Bois Locker Room case, Cyber Cell has arrested the group admin and examined 24 students. Devices have been seized and further investigation is on.

Rhea Chakraborty Back On Instagram After 8 Months With This…