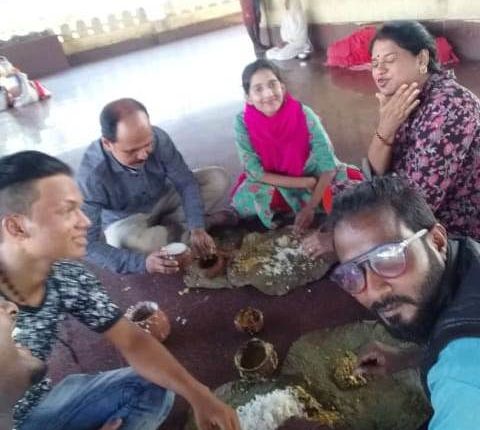 Puri: Police on Monday detained two persons after a photograph of an Ollywood actress clicked inside Jagannath Temple here created a flutter on social media the previous day.

The detainees have been identified as Debashish Singh of Puri and Raja Dalai of Nayagarh.

According to police sources, the duo was detained on the basis of a complaint lodged by the temple administration.

There is a strict ban on carrying mobile phones into the 12th century shrine.

The Odia actress Divya and five others were shot relishing ‘Mahaprasad’ clicked at Anandabazar with Meghnad boundary within the frame. And the picture has been doing the rounds on social media since Sunday.

The actress had later clarified that that she was aware of the ban and did not carry her cellphone into the temple. “Someone might have clicked my photo and released it on social media platforms. I urge the administration to investigate the account from which the photograph was posted,” the actress, who starred opposite Babusan in the recently-released Ollywood movie Mr Majnu, had said.

According to Section 30-A (4-C) of Jagannath Temple Act 1953, devotees cannot take camera into the shrine. Mobile phones too have been banned. Violation of the Act is a punishable offence and attracts imprisonment up to two months and a penalty of Rs 1,000, a temple administration official said.

‘Lucknow Palace’ In Bhubaneswar’s Saheed Nagar Is A Big Draw