BerhampurCity
By Sunil Patnaik On Dec 7, 2021 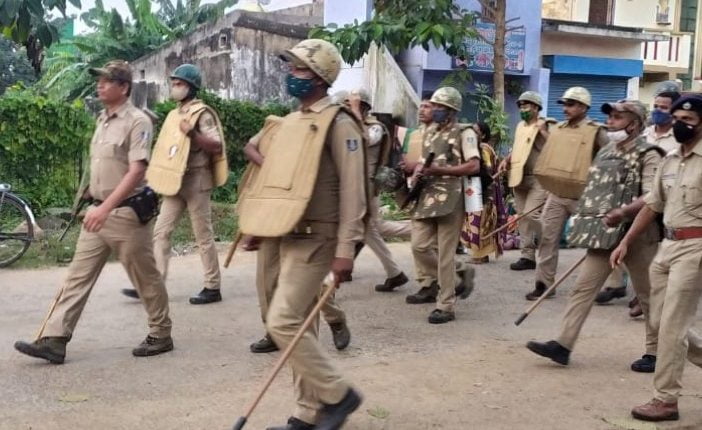 Berhampur: Goudabandha Harijan Sahi in Lanjipalli turned into a battlefield during eviction of unauthorised houses by Berhampur Municipal Corporation (BeMC) on Tuesday.

The irate slum dwellers pelted stones at the eviction team following which police had to resort to mild lathicharge to disperse the crowd. . Enforcement team officer Tarun Kanta and driver of the JCB machine sustained injuries during the stone pelting.

A woman resident of the slum also sustained minor injuries as bricks fell on her leg during the eviction drive. She has been admitted in MKCG Hospital and her treatment expenses are being met by Red Cross.

The eviction drive has been suspended after evening and the work will resume on Wednesday, stated BeMC officials. Around 30 families were evicted on the day.

Police also conducted a flag march in Lanjipalli to prevent the tension from escalating.

Sources in BeMC said, a seven day notice was served to the victims to evacuate the place. However, the victims said they requested the authority for more time and observe ‘Margasira Gurubar puja’.

According to reports, 112 houses will be evicted as per the order of National Green Tribunal (NGT) and all of them have been allotted houses under Rajiv Awas Yojana at Nehru Nagar.