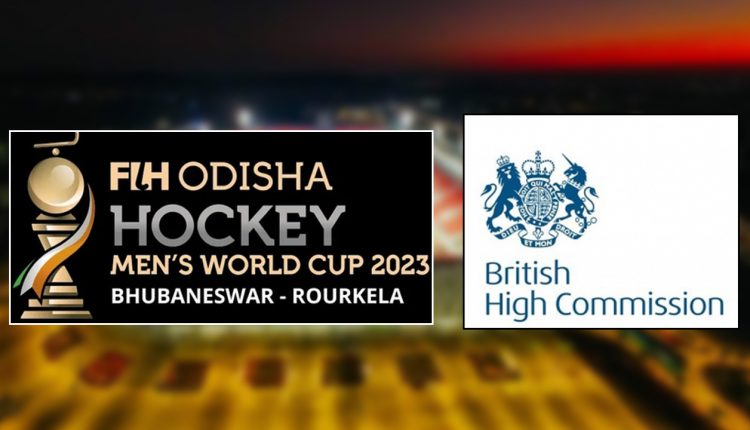 Bhubaneswar: Britain will be observing a Week of Wales during the FIH Men’s Hockey World Cup 2023 creating UK-Odisha linkages through sports, education and technology.

The British Deputy High Commission, Kolkata will be collaborating with Study in Wales and the Welsh government to organise a number of events in Bhubaneswar from January 17 to 19.

Wales Men’s field hockey team will compete in the FIH Hockey World Cup 2023 for the first time, with the backing of lead sponsor Study in Wales. After securing their place on home-turf in Wales at the October 2021 World Cup Qualifiers, the team will compete in Bhubaneswar and Rourkela during the tournament, a pres release said.

Wales will join hockey nations from around the world, including India, Germany, England, the Netherlands, and Australia in the competition.

First Minister of Wales, Mark Drakeford said: “Reaching the Hockey World Cup is a fantastic achievement for this team – I wish them the very best of luck in India and we’ll be cheering them on through their games.It also marks the start of a great year of sport for Wales. Just a few weeks ago, Wales was playing in the football World Cup finals in Qatar. Now, we start a new year with the Hockey World Cup

Describing India as an important country and partner for Wales, Mark said, “We are lucky to have a fantastic community of people who have come from India and who have settled in Wales, making their future part of our future, whether that’s in the health service, in universities or in business.”

The British Deputy High Commission office along with colleagues from Study in Wales and the Welsh Government will watch the Wales Vs India match at Kalinga Stadium on 19 January, the release said.

British Deputy High Commissioner to East and Northeast India, Nick Low said: “I am proud to join Study in Wales, the Welsh Government and the Welsh national hockey team to celebrate a Week of Wales in Odisha.  The pride and passion the Wales football team and its supporters brought to the FIFA 2022 World Cup are the hallmark of a special nation that I am honoured to represent.  You will see that pride and passion when Wales take the field in the FIH Hockey World Cup.  And you will see it when I join Study in Wales to promote its world-class universities, which are at the forefront of tackling global challenges.”

The British Deputy High Commission will be joining Study in Wales and the Wales Men’s hockey team for an interaction with young students at KIIT Bhubaneshwar on January 17.

Professor Ben Calvert, Chair of Global Wales, said:“This partnership is another welcome step for Study in Wales, sports diplomacy and the ongoing development of our relationship with India. It is a positive initiative for Welsh universities and colleges, enabling the sector to reach international audiences through hockey on the world stage.”

The Welsh Government has lined up few events in Bhubaneshwar. The British Deputy High Commissioner to East and Northeast India will be chairing a roundtable on ‘Women in Tech’ at KIIT. He will talk about UK start up eco system at the women in tech event.

The British Deputy High Commission and the Welsh Government will jointly host a reception for key stakeholders in Bhubaneshwar on January 19.

Teachers State Protest Against Irregularities In OTET Results In Cuttack