Ukraine Evacuation: No Indian Left In Kharkiv, Govt’s Focus Is Now On Sumy 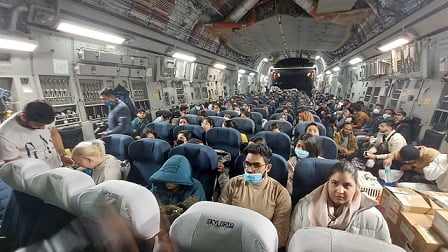 New Delhi: There is no Indian left in under-attack Kharkiv, Ukraine’s second-largest city which has been facing heavy bombardment from Russian troops.

Briefing the media, Ministry of External Affairs (MEA) spokesperson Arindam Bagchi said on Saturday that the Central government’s focus, in its efforts to evacuate every Indian stranded in war-hit Ukraine (Operation Ganga), is mainly on Sumy now.

“From Pisochyn and Kharkiv, we should be able to clear out everyone in the next few hours… So far as I know no one is left in Kharkhiv,” Bagchi said.

According to information available with the Centre, over 700 Indian students are in Sumy right now.

“Main focus is on Sumy now… We are exploring all options. There are challenges like ongoing violence and lack of transportation… best option would be ceasefire,” he said.

Giving an update on Operation Ganga, Bagchi said 48 flights have so far brought back Indians from Ukraine, including 15 in the last 24 hours.

“Approximately 13,300 people have returned to India so far… 13 flights are scheduled in the next 24 hours,” Bagchi stated.