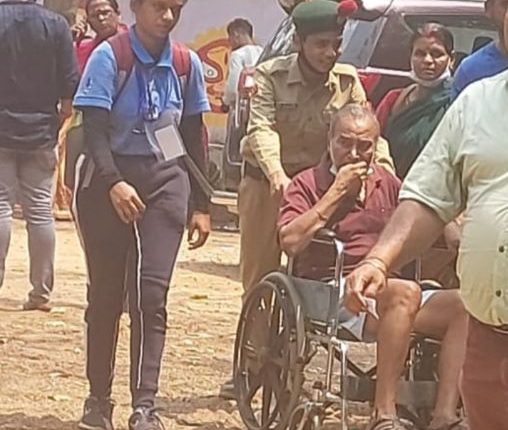 Berhampur: The cadets of NCC and Scout and volunteers of different high schools in the city won the hearts of voters during the polling for Berhampur Municipal Corporation (BeMC) on Thursday.

District Education Officer of Ganjam had requested the headmasters, principals and Pradhan Acharyas of secondary schools on March 22 to support the poll process by deputing the cadets of NCC, Scout and Guide and students voluntarily.

Accordingly, about 230 cadets and students were asked to report at assigned booths. They were tasked to help the physically challenged coming to the booths to cast their votes in the urban election.

They did a commendable job on the day and drew appreciation of the voters. They took the physically challenged and visually impaired persons in wheelchairs and helped them exercise their franchise. They ensured that such persons did not face any discomfort in the booths.

The teachers of these students from their schools were also present to ensure their safety and provide food and water.

According to district election office sources, 1,33,677 out of total 2,55,326 voters cast their votes in 250 polling booths of 42 wards to elect the new Mayor and corporators on the day.

Renowned Anthropologist Deported To UK After Arrival At Kerala

Over Half Of Ukraine’s Children Displaced Due To Russian Invasion: UN