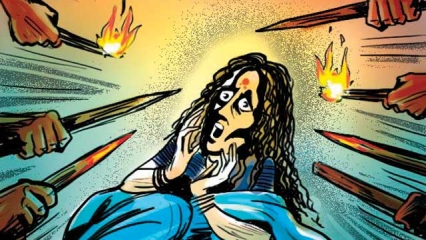 Puri: In a strange case of turning the tables on the victim rather than the accused, a family of Hatapada village under Satyabadi block in Puri, has been allegedly ostracised by a kangaroo court of the village, all because they complained about the theft of their mobile phone.

According to sources, a mobile phone belonging to Hrushikesh Sahoo of Hatapada village of Satyabadi block in Puri district was stolen. He complained about this to the village committee. According to the village committee rule, he was asked to deposit Rs 25 as a fee. But he alleged that the committee asked him to deposit another Rs 5,000 to conduct an investigation into the matter. Upon refusing to pay the amount, Hrushikesh and his family were allegedly ostracised by the committee.

His children are not being allowed to enter their school. “We are not allowed in any meetings or programmes of the village,” said Hrushikesh.

He also said that he has lodged a complaint at the police station but no action was taken. However, the village head has denied the allegation.

Puri Additional Superintendent of Police, Dhirendra Nanda, said he has ordered an inquiry into the matter.