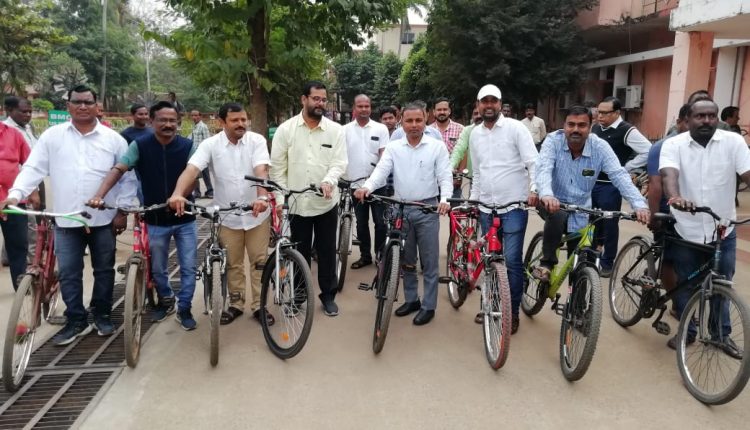 All staff, including senior officials, of the three administrative bodies shunned two-wheelers and four-wheelers and pedalled to their work stations to promote city environment, healthy lifestyle and sustainable urban habitat. And those staying on the outskirts of the city took public transport to reach office.

“Over 1,500 employees of all three institutions rode cycles to office today and the number will go up in the coming back,” said the BMC Commissioner.

The three agencies had earlier issued official orders to their employees, including the outsourced staffers, to come to office once in a week on cycle or by walking from Friday (December 13).

However, this is not the first for the city administration under the non-motorised transport (NMT) initiative. To promote NMT and ensuring healthy and better lifestyle among citizens, Patha Utsav (street festival) were organised on Janpath between Master Canteen and Ram Mandir Squares every Sunday morning in the past.

Now, the BDA has also made Public Bicycle Sharing (PBS) mandatory for all housing projects in order to promote non-motorized transport (NMT) for a clean city environment. Dedicated cycle tracks will now be an integral part of planning.

And this has become the call of the hour considering the fact that vehicles (14 lakh as per the figures available from the Regional Transport Office) have outnumbered the human population (10 lakh as per 2011 census) in the city. Bhubaneswar along with Cuttack, Rourkela, Balasore, Angul and Talcher has witnessed a significant rise in pollution levels due to increase in motor vehicles, unplanned urbanisation, industrial and agricultural activities, according to the latest report of Odisha State Pollution Control Board.

The state government has already initiated the work on developing a low-carbon mobility plan (LCMP) for the Odisha capital. The Housing and Urban Development (H&UD) department and the BDA in cooperation with German development agency Deutsche Gesellschaftfür Internationale Zusammenarbeit (GIZ) are jointly working on the LCMP project for the city.