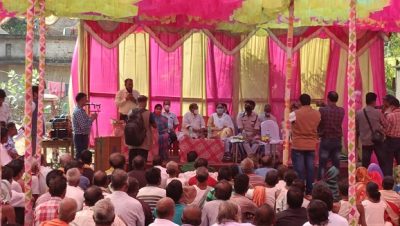 Paradip: After gram panchayat-level meetings to elicit people’s response to the proposed integrated steel plant of the Jindal Steel Works (JSW), a village-level meeting was held at Govindpur in Jagatsinghpur district on Friday.

The JSW had held district tripartite meeting held on November 10, followed by panchayat-level meet at Gadakujang on November 16 and at Nuagaon on November 17. Around 3,500 people participated in the meetings where the villagers to be affected by the project expressed their opinions and concern.

Around 200 villagers and representatives of district administration and JSW participated in the meeting at Govindpur under Ersama block. Alternative livelihood and employment, health and education intervention, environment and water were the top concerns of the villagers and were addressed by the district administration and the company officials. A roadmap to initiate livelihood engagement for people at the project site was announced by JSW.

The villagers demanded a job for at least one person from a family, construction of a sea wall to check erosion and compensation for the affected people who depend on betel vine orchards for livelihood.

The company officials said it plans to engage 1,000 people from the ISP area across different JSW projects in India depending on suitability and requirement.

The company has proposed a world-class 12-million-tonne-per-annum (MTPA) steel plant, 900-mw power plant and a captive port in 3,000 acre of land with an estimated investment of Rs 50,000 crore in the district.

The administration has selected the POSCO site near the port town of Paradip for setting up the JSW project after the South Korean steel company withdrew its proposed mega steel project.