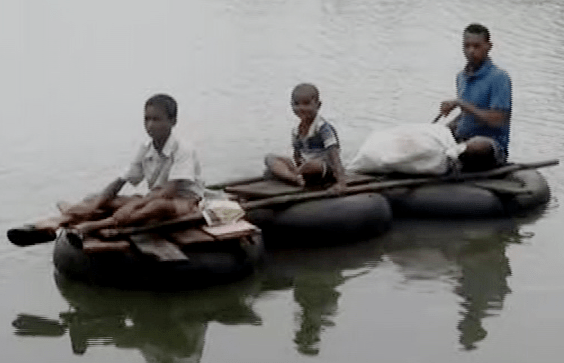 Bhubaneswar: The Mahandi continued to swell worsening flood situation in the riverside districts of Odisha.

In Jagatsinghpur district, floodwater of Mahanadi and Paika rivers entered Saharadiha, Jillanasi, Phulabelari, Bhandua, Haripur and Madhapur villages in Kujang block. Road communication has been disrupted with water flooding the road at Saharadiha village. Besides, the floodwater has submerged hundreds of hectares of paddy fields in these villages.

In Khurda district, floodwater of Rajua river, a tributary of Daya river, entered six panchayats while four panchayats of Kanas block in Puri district were marooned with Makara river in spate.

In Banki sub-division in Cuttack district, the backwater of Mahanadi entered Sukhuakhala village in Similipur panchayat through Ranasankha nullah.

Meanwhile, the authorities of the Hirakud Dam closed five more gates on Thursday. By 12 pm, the water level of the dam was 626.65 feet (optimum level 630 feet). While the inflow of the floodwater to the reservoir was 2,41,494 cusecs per second, the outflow from the 5 gates was 1,01,731 cusecs per second.