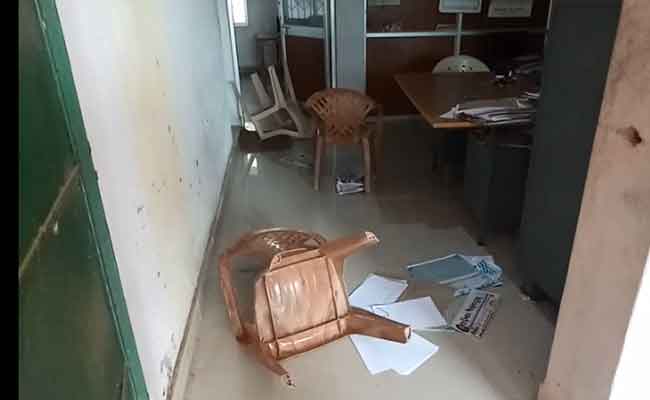 Bhubaneswar: Contrary to the assurance by Odisha Pradesh Congress Committee (OPCC) President Niranjan Patnaik that the six-hour bandh in the state will be peaceful, violence was reported from several places on Monday.

At Master Canteen square in Bhubaneswar, protesters were seen shouting at one commuter and even kicked his car. They also smashed the car’s glasses.

At PMG square in Bhubaneswar, there was a scuffle between Congress workers and police.

At Astaranga in Puri district, protesters barged into the Horticulture Department office and vandalised it. The protesters also clashed with police when the latter tried to evict them from the office.

Though Congress had decided earlier that vehicles draped with flowers for marriages and hearse vans will be allowed to ply, protestors blocked the path of a vehicle carrying members of marriage party at Binka in Sonepur district. They were returning from Rourkela to Nabarangpur after attending a marriage.

Similarly, protestors did not allow a vehicle with a bride and groom to move at Rajgangpur in Rourkela. They were returning Rourkela from Berhampur after their wedding.

Also Read: All You Need To Know About Today’s ‘Peaceful’ Odisha Bandh By Congress; Blockades & Exemptions