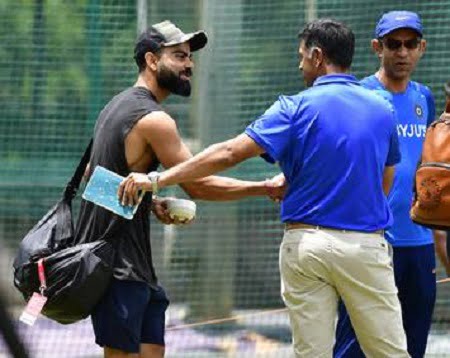 Dubai: India captain Virat Kohli seems unaware about former India skipper Rahul Dravid’s appointment and next head coach of the Indian cricket team. Kohli said he is yet to discuss with the top brass of the Board of Control for Cricket in India (BCCI) about Dravid being in line to succeed Ravi Shastri.

Kohli’s comments were in response to news that Rahul Dravid is the front-runner to become next India head coach. Dravid met BCCI president Sourav Ganguly and secretary Jay Shah where The Wall was convinced to take up the role of the head coach.

“No idea exactly what’s happening on that front. No detailed discussion with anyone yet,” Kohli sharp reaction came when asked about Dravid’s potential appointment.

Dravid, 48, has been looking after the national ‘A’ and U-19 sides for the past six years. He currently heads the Bengaluru-based National Cricket Academy.